Tips from an inspirational model railway 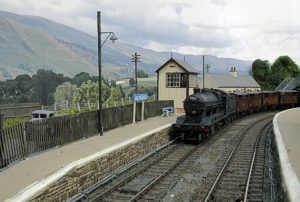 His layout is simply breathtaking.

Ben recently took a few minutes out to talk with me about his layout and share some tips.

Andy: Your layout is based on Thurso and surrounds, what’s the story here?

Ben: Thurso is my home town and since I was about sixteen I planned and then started, a model of it. However, in the late sixties, there was nothing available vaguely Highland or Caledonian in the shape of engines so my modelling took tangents,  I built my own locos and building random layouts for a while. But the nagging want to recreate my youth never left and eventually I returned to Highland roots creating this layout which is based on the general layout of Thurso and a through station modelled on Helmsdale.

I started the layout in 2012 and most of the building was done in that year but I’ve continued to improve it since and I spent several months this last year altering and adding bits.

Andy: The detail is amazing but what aspect of the layout are you most pleased with and why?

Ben: I can’t really single out any one thing, but I am happy with the overall effect.

To my mind it all ties together to give me what I had in my minds eye almost fifty years ago when I first had a vision of modelling Thurso with the appropriate rolling stock.

I had started both of them at one time around 1970 but back then so little was available compared to now and although models were made the difficulties of it all led me to twenty plus years of building freelance layouts based on the offerings of Airfix and Mainline.

Fortunately, I eventually returned to the Highland Railways, building a model based on Kyle of Lochalsh but with various Highland Railway buildings, and this led in its turn to the present set up.

Andy: And the ground work? It looks fantastic, especially the grass and ground around the track and turntable. What’s your technique? 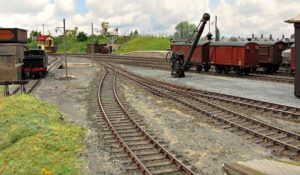 Ben: The embankment grass is a mix of types — usually some Woodland Scenics as a base and then layers of static grasses on top, put on with a Grassmaster static grass applicator.

Unfortunately, I can’t be too specific about this because I didn’t record the mix of it all.

There are about a dozen “ready mixes” of various grasses in Chinese takeaway boxes that I dip in to, along with a box full of opened packets of scatter from the likes of Noch, Woodland Scenics, and Greenscene.

Recently I have been using some types from wargame suppliers as well.

The scenery at the front of the layout tends to get a bit flattened by my reaching over it so now and again gets a refresh of static flock which helps add to the 3D effect.

I have kept grass in yards to a minimum as I feel that this is something that is often overdone on layouts, and instead, I use a traditional scatter with a blend of two or three shades — whose I have no idea — and is sprinkled over a brushing of diluted PVA.

Andy:  You’ve been doing this for yours but if you had one tip for someone starting their first layout, what would you say? 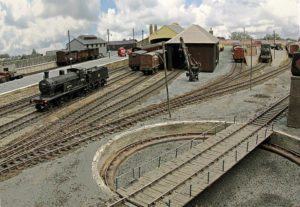 Ben: A difficult one…

Railway modelling is such a broad church and what may be relevant to some would be useless for another.

However, there is so much information available online that I would strongly advise a beginner to join, or at least follow, railway forums and FB pages/groups [like Model Railway Builders 🙂 Andy ] which can provide plenty help and information for a beginner.

Andy: Your track work is wonderful, you’ve mentioned using Tracklay foam elsewhere; talk us through it. 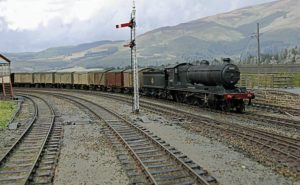 Ben: Track is C&L 00 British outline Code 75 with Peco Code 75 points. The improvement in appearance compared to the “normal” commercial track is enormous.

What passes for 00 track is actually HO with 3.5mm dimensions and sleeper spacings and to be honest it looks nothing like UK Permanent Way, even ignoring to too narrow gauge in the first place.

I lay my track using Tracklay, which is a long roll of foam, sticky on one side.

A length of plain track has its sleepers weathered with several shades of browns and greys and once dry, a length of the underlay foam is cut and the track stuck on it. Then ballast — Greenscenes 2mm black ash in my case — is poured over it generously and pressed firmly down. The rail is then upended, excess ballast shaken off and gathered for reuse, and a metre of track is ballasted and ready for laying in under a minute.

The foam can be curved after the ballast is applied and the track is then laid, on top of a base of 5mm camping mat type foam that covers the baseboards. 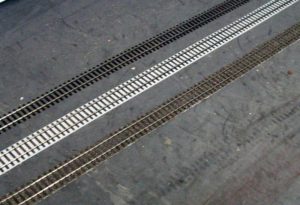 Once happy with running it is pinned lightly and 1/16th cork is cut and used to fill in between tracks, holding the rail and underlay in place but not glued to it. Then a small bead of Copydex is brushed along the painted cork and a sliver of ballast is laid on top of this, and any pins removed.

This gives a degree of flexibility to the track, allowing some vertical movement, which I find can help with electrical connection and smooth running.

I know it is a bit unconventional but derailments are almost unknown and it makes for easy adjustment if the track has to be altered at any time.

Andy: Richard, If you were to start over, what would you change and why?

Ben: Nothing much – the methods I have honed have given me what I always wanted – a reliable operating layout based on the area I grew up in with a good selection of ex Highland and Caledonian locos.

I did toy with EM gauge at one stage, but the thought of both building track and converting locos put me off. However, the recent announcement by the EM Society of read-to-lay Peco track would probably have swung it for me if I was starting out now, but have accumulated so much stock so will stay with OO gauge.

Andy: Thanks Ben, it’s fascinating to hear the story and share your techniques. If you’d like to see more of Ben’s layout, more photos can be seen on RM Web or the Model Railway Engineer community.