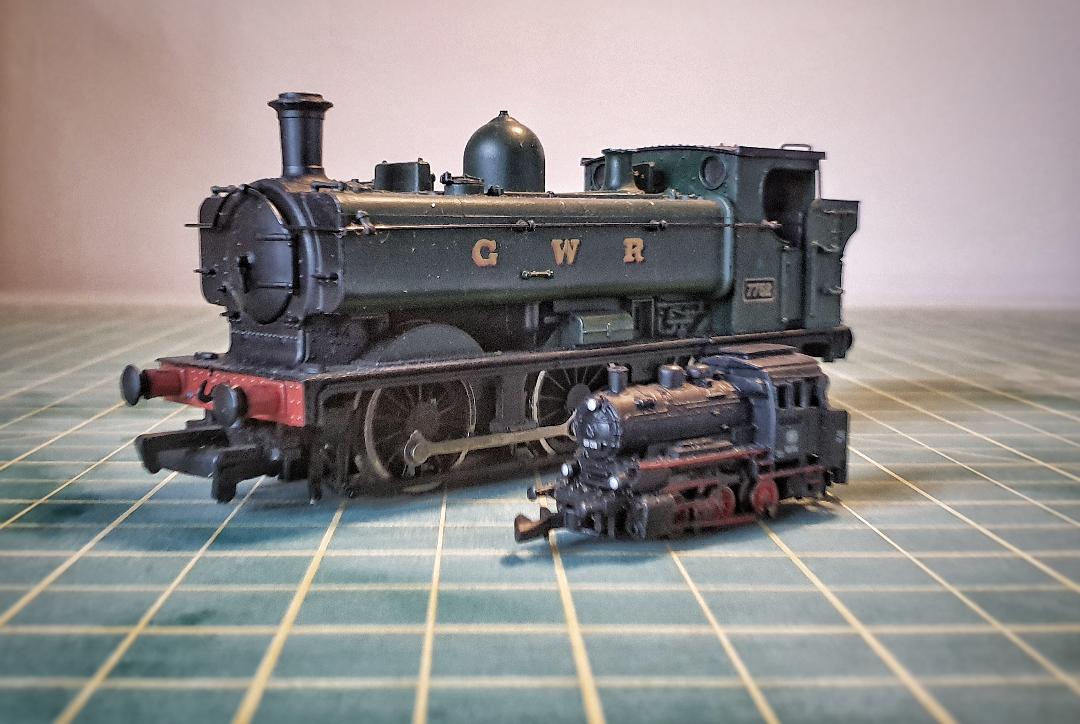 OO gauge is the most popular UK model railway gauge, Z gauge is the smallest commercially available model trains. Both have strengths and weaknesses. Here’s what you need to know before starting.

Most people in Britain have heard of OO gauge model railways. They’re what Hornby make and have been around for donkey’s years.

Z gauge is still relatively new but gaining popularity fast due to its tiny size. As houses in the UK get smaller, more and more people wanting a model railway are struggling to find room for a traditionally Hornby OO railway and looking for alternatives.

This essentially boils down to two choices, N gauge  or Z gauge.

I’ve covered N gauge compared to OO gauge before so won’t dwell on that further, instead this article looks at the more diminutive Z gauge.

First up, can you get the rolling stock (the trains, wagons and carriages) to match your interest. And here it’s a clear win for OO for UK modellers although this is not so clear cut for American, German and Japanese railroaders.

In the UK, OO has been around for much longer and as the most popular and not surprisingly has the widest range of rolling stock from Hornby and Bachmann Europe but also Dapol, Heljan, Hattons and many others. By contrast, there are no manufactures currently producing British locomotives in Z gauge.

For non-UK use, it’s more varied.

Not surprisingly, given Z gauge was introduced by German manufacturer Märklin there is more German rolling stock available, including steam, electric and diesel locomotives.

And Märklin’s range doesn’t stop at German trains either. They, along with MTL and AZL in America, produce a number North American prototypes.

And, OO being a mainly UK gauge has limited options in Germany and the US.

Overall, I would say OO is the winner for range and availability but for Germany and the US, Z gauge has the edge.

For price, OO gauge is cheaper

While Z gauge was created in 1972, OO gauge has a much longer history and as such there is more OO gauge product around and more suppliers which results in lower prices. Märklin Z scale locos start at around £180 (199,99 €) while Hornby OO models start under £50 for railroad models and £100 for the finer quality ranges.

If you want a model railway but want something a bit different to yet another model railway on a board, a layout in a wine box, guitar case or coffee table for example, Z gauge offers more options.

It’s tiny size means you can get very believable, fun to operate, layouts in spaces that just wouldn’t be possible with OO trains.  The smallest space required for an OO gauge oval layout is 3ft by 3ft where this can be achieved in half the size of its smaller brother for example. This means you can build layouts in unusual places for something different and if you have the space, you can get more track, do more and have more fun in the space with Z gauge.

Z scale modellers are more limited in their trains and pay more but can do far more in the space available than their OO gauge counterparts.

If you want a small British themed layout, OO gauge should be your choice but if you’re not worried about the actual trains running and just want a lot of track and rolling stock in the space you have, Z gauge should be seriously considered.

If this has sparked your interest in Z gauge and you’d like to know more, read my comprehensive guide to common z gauge questions and answers.