Home » Info » Who was Timothy Hackworth?

Who was Timothy Hackworth? 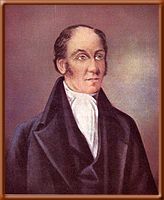 Born on 22nd December 1786 in Wylam, Northumberland, Timothy Hackworth started from relatively modest beginnings. One of five children to the master blacksmith at the local colliery.

On this 14th birthday, he became an apprentice at Wylam Colliery where he assisted in the building of Puffing Billy, the world’s first commercial steam locomotive and which was used to move coal wagons from the mine at Wylam to the docks at Lemington-on-Tyne in Northumberland.

In 1807, at the end of his apprenticeship, he took over his father’s position and was then involved in the production of two further locomotives, the Grasshopper and Wylam Dilly. 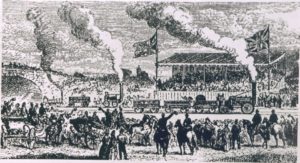 The Rainhill Trials. The Rocket is in the foreground and in the background on the right is the Sans Pareil.

In 1824, he became Manager at Robert Stephenson and Co only to leave a year later after receiving a better offer to work as locomotive superintendent on the Stockton and Darlington Railway (S&DR). A position he gained on the recommendation of George Stephenson.

Here he worked with Stephenson on the development of Locomotion No 1 and other locomotives. These early engines were problematic and Hackworth was instrumental in improving them, developing the steam blastpipe and through his persistence ensured the early success of steam locomotives.

His own engine, the Sans Pareil took part in the Rainhill Trials in 1829.

In 1833 he became responsible for working of the locomotives and workshops of the S&DR but was allowed to operate his own business as a builder of locomotives and stationary engines.

For his business, heopened new workshops, foundry and built houses for workers and, in 1836, built the first locomotive to run in Russia for the St Petersburg railway. In 1837 the Samson for the Albion Mines Railway in Nova Scotia, one of the first engines to run in Canada.

He built his last locomotive, Sanspareil no.2, in 1849 but died of typhus in 1850 before it was sold. He was survived by his wife and 5 children.