Home » Model Railways » Electrics » What magic is this? How do I get working bicycles on my model railway?

What magic is this? How do I get working bicycles on my model railway? 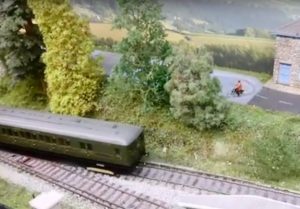 You’ve probably seen moving cars, buses and lorries on model railways but how about bicycles complete with cyclists, their legs furiously moving up and down?

Just watch this. The tiny little cycles move around complete with legs pedalling away.

What magic is this?

When I first saw these bikes on a layout at Woking model railway show, where the video above was recorded, I was just impressed that there were moving bicycles on the layout. My interest jumped to a whole different level when, on looking closer, I realised the cyclists were actually peddling their bikes!

Yep, their legs were furiously peddling away, up and down, round and round.

A 12V motor driven chain sits under the road surface. At a point on the chain are two magnets which hold the bike in place, as the chain moves the bike goes with it.

But what about the leg movement?

If you look closely at the bikes, you’ll just about see a clear plastic wheel in the center of the bike that touches the ground. As the bike moves, this wheel turns. The cyclist’s legs are attached to this wheel and pined at the top so as the wheel turns the legs move up and down.

Simple but clever and it gives a very real impression that the cyclist is peddling the bike. The 12V motor is geared so keeping the speed down to something appropriate for the scale.

But it doesn’t stop there.

As the chain is hidden below the baseboard surface and uses magnets to connect to the vehicle above there’s no interruption to the surface material and so it can be also used to cars, buses and vans and even boats on rivers or lakes. Here’s the full video from the makers.

The system is flexible and works for all manner of vehicles. The only limitation is that the distance between the chain magnets and the vehicle above them must be thin enough for the magnetic pull to hold the cycle etc.

Magnorail recommends a surface layer, between the chain the vehicle, of no more than 1mm but this is enough to create whatever surface is desired.

The system will work for HO/OO, N, TT, Z gauge and can be easily made to work with just about any larger vehicle – cars, vans, buses, boats etc. The cycles are sadly only available in HO/OO scale.

The sets cost around £140 to £150, depending on the pound to Euro exchange rate. You can find out more at Magnorail.com.