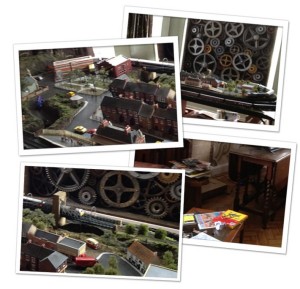 Could it be true? Two of my favourite things collide on New Years Day? Yes, a Hornby model railway starred in a scene of opening episode of the new 3rd series of Sherlock, alongside Benedict Cumberbatch no less.

The first episode of the eagerly awaited third series of Sherlock, entitled The Empty Hearse, was broadcast on BBC One on New Year’s Day.

The model railway featured in a crucial scene featuring actors Benedict Cumberbatch (Sherlock Holmes) and Louise Brealey (Molly Hooper) and was built by Hornby staff who travelled to the set in Cardiff after the firm was asked to supply a track layout and locomotives. The storyline see’s London under threat of a huge terrorist attack and Sherlock Holmes is called in to save the day and figures out how the attack will take place visiting a tube fan who runs a model railway in his home. (I won’t spoil it for anyone who hasn’t seen it by saying more).