More on the Train-Tech Screen 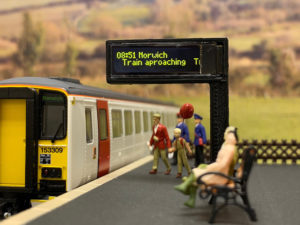 In my highlight of 2018, I mentioned the Train-Tech Screen as one of the highlights of the year. Here’s more information on this innovative little product.

If your layout is based on the modern era you’ll have encountered a problem.

Namely, while the modern era station buildings retain many of the same features and the same modelling techniques can be can be used for previous stations of the previous era’s there is one aspect that has moved on. Significantly.

That being platform signage.

Modern era stations feature updating electronic displays and recreating these in miniature has posed a problem for all but the most electronically gifted modellers.

The answer came in ate last years when Train-Tech came out, a product that allows OO gauge builders to have their own unique and updating digital platform signage.

Essentially, Train-Tech Screen it’s a miniature computer screen – available in hanging or post mounted housing to look like destination boards and train indicators – and onto which you can programme your own stopping points.

The messages can vary depending on the direction of travel of the train and in response to a manually operated switch, DCC control or train sensor.

A DCC controller is needed to programme your station names and messages but once this is done it can be powered from any 8-16V smooth DC or 9V battery supply or, of course, a DCC feed.

The video clips below show the Train-Tech Screen in operation but these only give you an idea of what they can do.

And with a little imagination, the system can be used elsewhere on a layout. It can be fitted into OO gauge trains for onboard destination signage and Train-Teck also suggests using it in conjunction with the Faller road system and magnetic sensors to have road signs updating as vehicles pass for example and for bus stops.

Seeing these miniature signs on your stations change automatically as trains arrive and depart adds a whole different dimension of realism to a layout and brings it to life to a degree I’ve never seen or felt before.

At £50 for a screen, it’s also reasonably priced and affordable and is easily one of the most interesting and worthwhile additions to any layout I’ve seen in a long time.

The train-models are available brand new via eBay.