Model Snowmen: how to make an oo gauge Snowman 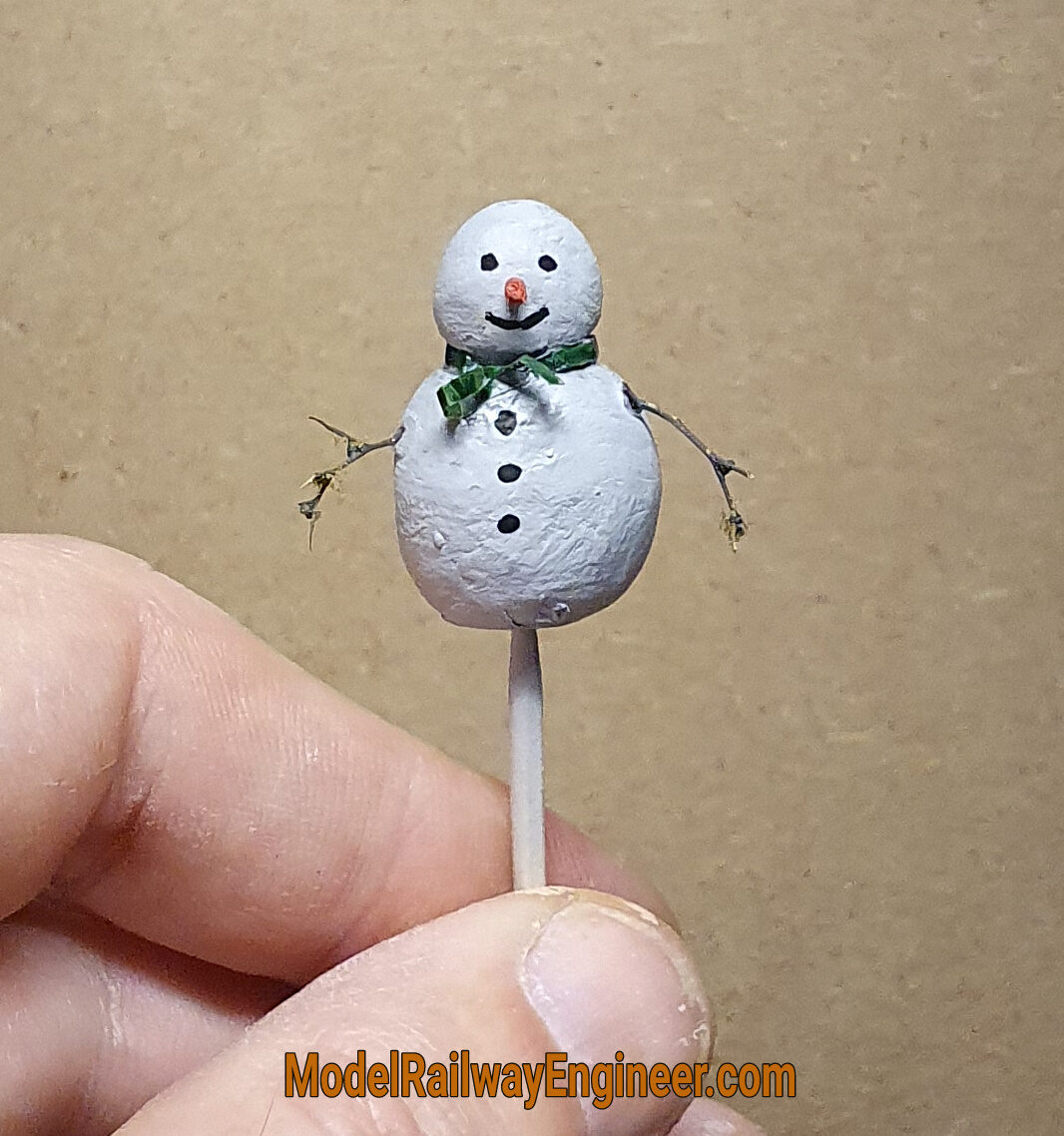 Want a snowman for your Christmas train set or Winter diorama? Don’t have a meltdown making them. Chill out and and follow this simple guide to making your own model snowman.

Living in South East England, we don’t get a lot snow. In fact, I can remember just a few occasions from my childhood when it did fall. And even fewer occasions when my boys were growing up.

But when it did we’d always rush out and make a snowman. It had to be done, no matter how little snow settled, we’d always have a go at making an anthropomorphic snow sculpture.

This year, like those of my childhood there’s little sight of the white stuff but I wasn’t going to let that stop me.

In lieu of the real thing, I’ve made my own small-scale snowman for my OO gauge railway. I might even put it on my Christmas tree train set when I get it out for Christmas.

But making Frosty was a lot fiddlier than I thought with quite a few false starts. So to save you the effort and work, here’s a quick tutorial on how to make your own snowman. 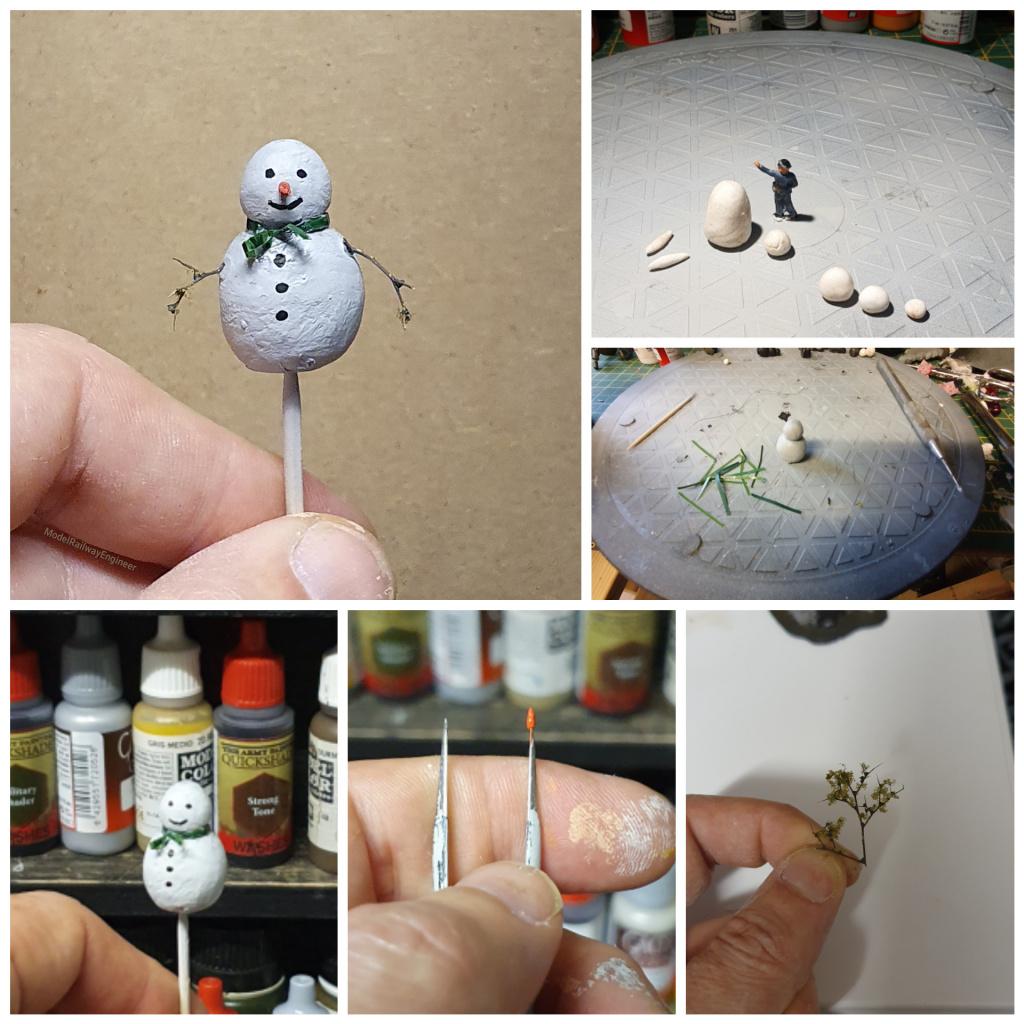 First up, making the basic shape.

Initially, I tried use some air-drying clay I had kicking around as it seemed the most obvious material. Just roll it into balls, add a slight curve added to the front for that characteristic plump snowman look and away we go I thought. (I used an OO gauge figure as a guide for height and size).

But that was until I left it to dry.

Unlike the real thing, it didn’t melt, the complete opposite in fact.

It cracked! The head in particular had a nasty gash down one side. And the finish was too smooth. I wasn’t a bit of texture to give it a ‘snowy’ feel. 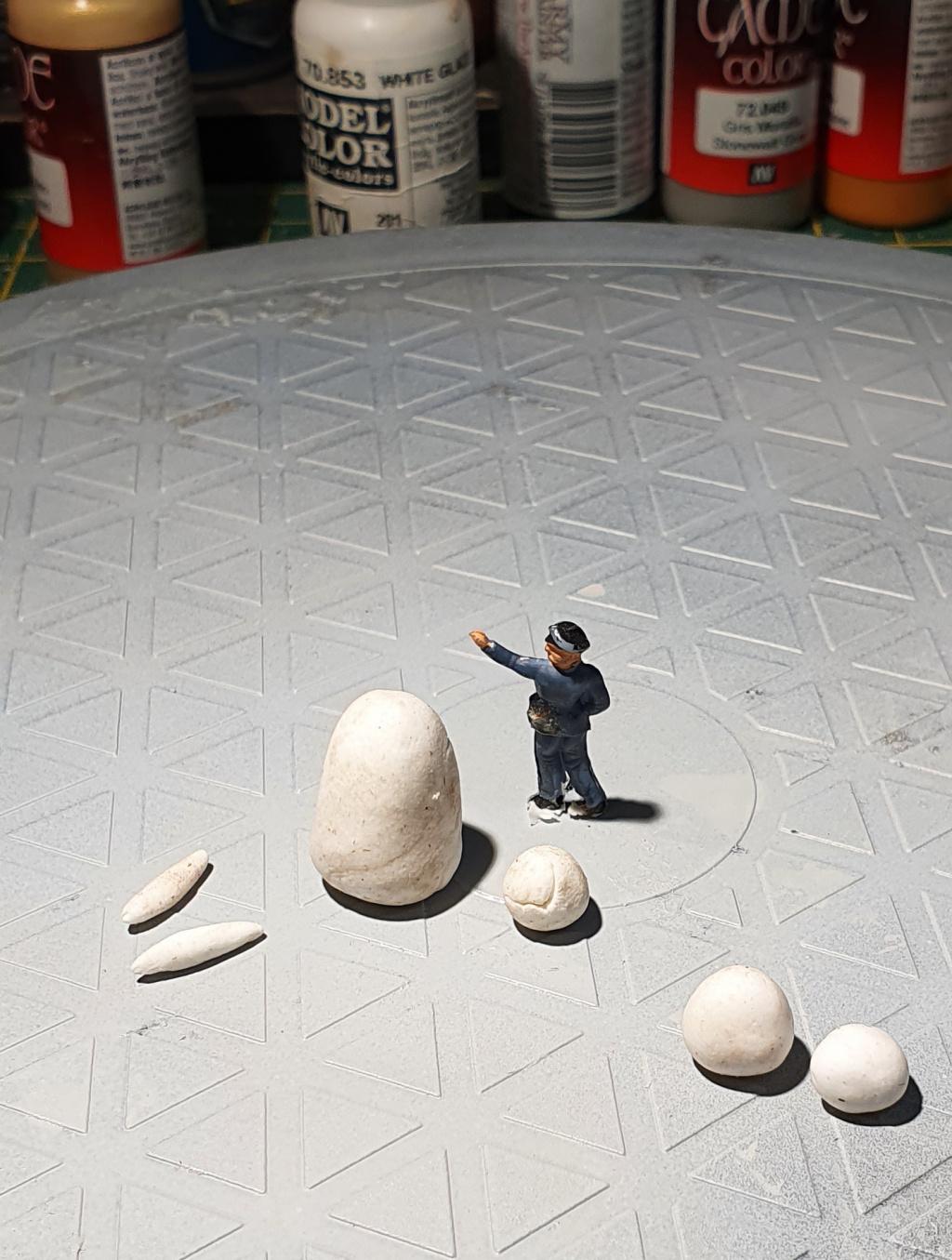 The first attempt. Look at the crack! Snowballs they arent.

After a few more trials I gave up on the clay and tried Milliput. This produced a much better finish while still being as easy to shape and most importantly didn’t crack when drying.

The snowmen I built with my boys were always on the large size so I went for a size and shape slightly bigger than the figure but there’s nothing to stop them being made slightly smaller as some of the experimental ones made from both clay (seen above) show.

Now using Milliput, I made a variety of snowman shapes and once dry glued them together with Superglue with a slither of wire through the body and head to hold them in place.

They took longer to dry than clay but I’m happier with the size, shape and finish and lack of cracks. 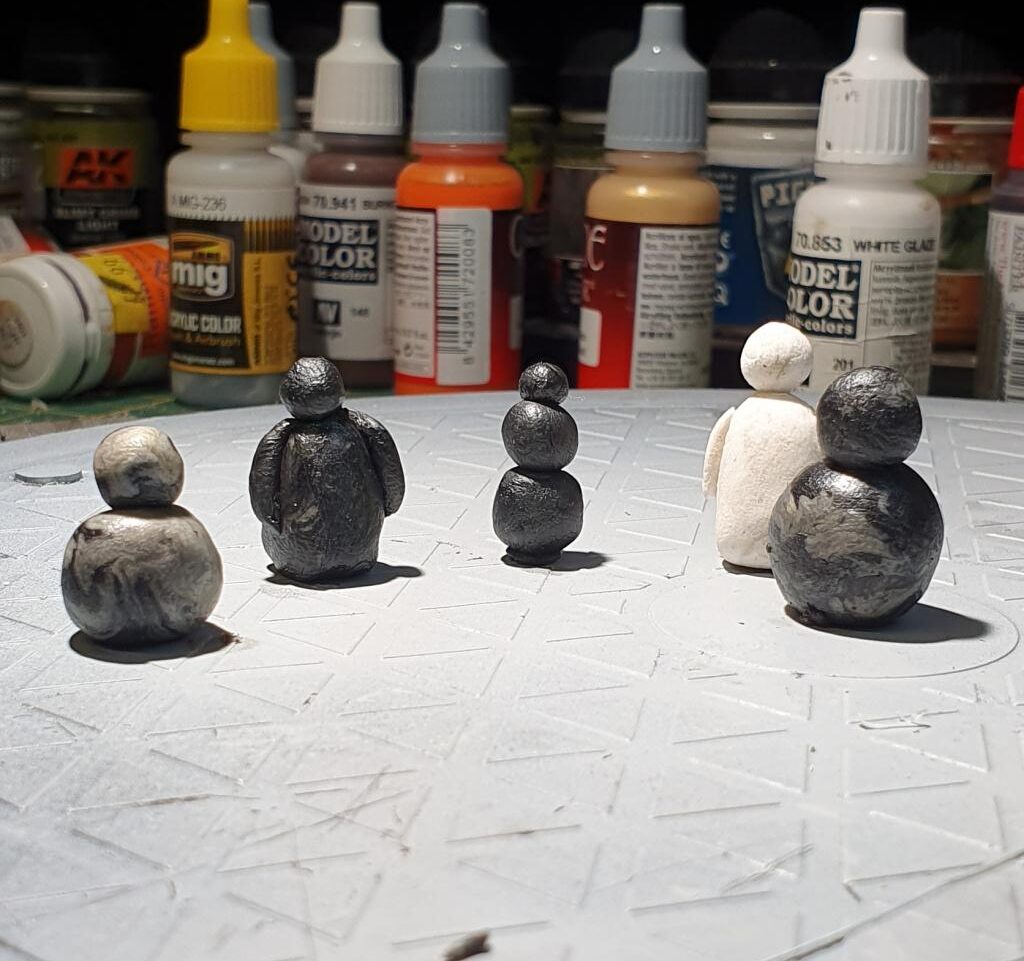 Unfortunately, unlike my air-drying clay that I had in White, I only had Milliput in Black so several coats of White paint were needed. I used Vellejo paint but any acrylic paint will work.  (This link will take you to the White version of Milliput on Amazon which will make thing easier).

Next up, came the scarf.

This was easily the most fiddly part.

For raw material I used the strands from some green tinsel. 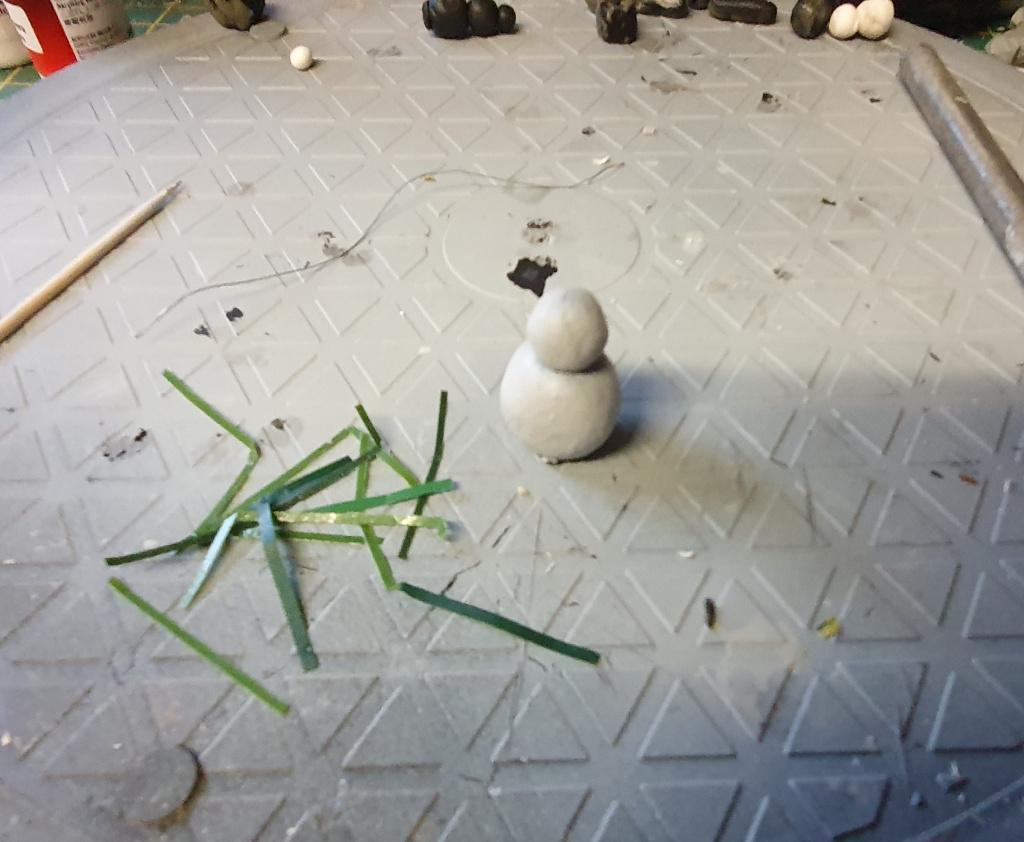 This was just the right size and colour.

At first I tried tying it into a knot around the neck as a scarf would be but even with tweezers this was a nightmare. In the end I gave up and glued it around in place around the neck and overlapped it at the front so as to look like a knot.

At the same time, I painted on the buttons, eyes and mouth using Black acrylic paint.

The result worked well and I’m content with it. 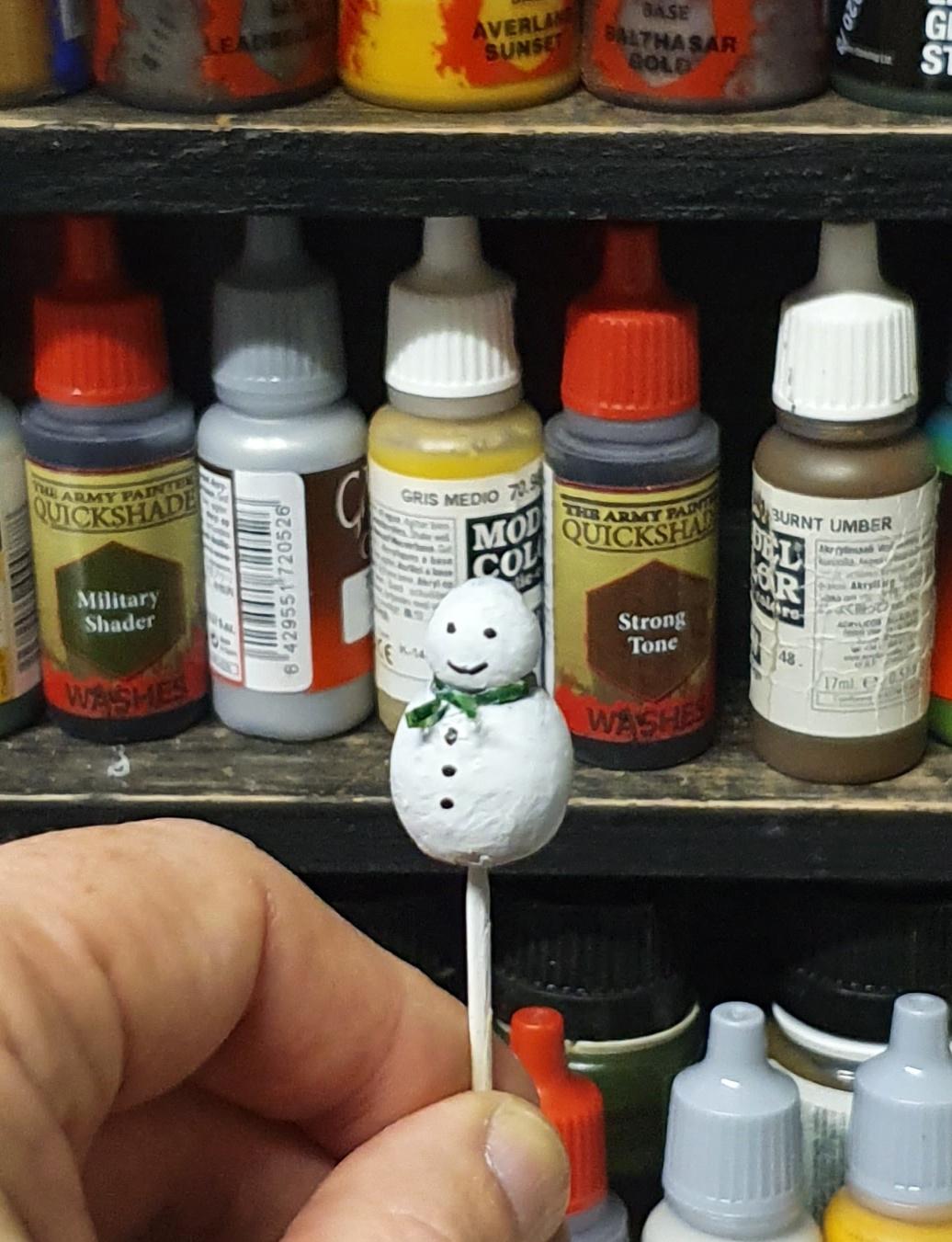 Perhaps the trickiest bit was the nose.

I tried scrapings from a plastic sprue but this didn’t look right. Neither did paper.

In the end I used another tiny bit of Milliput, rolled it into a cone and then painted it.

Getting a Carrot-correct shade of Orange took some experimentation using blends of Red, Yellow and White but the end result is quite effective. 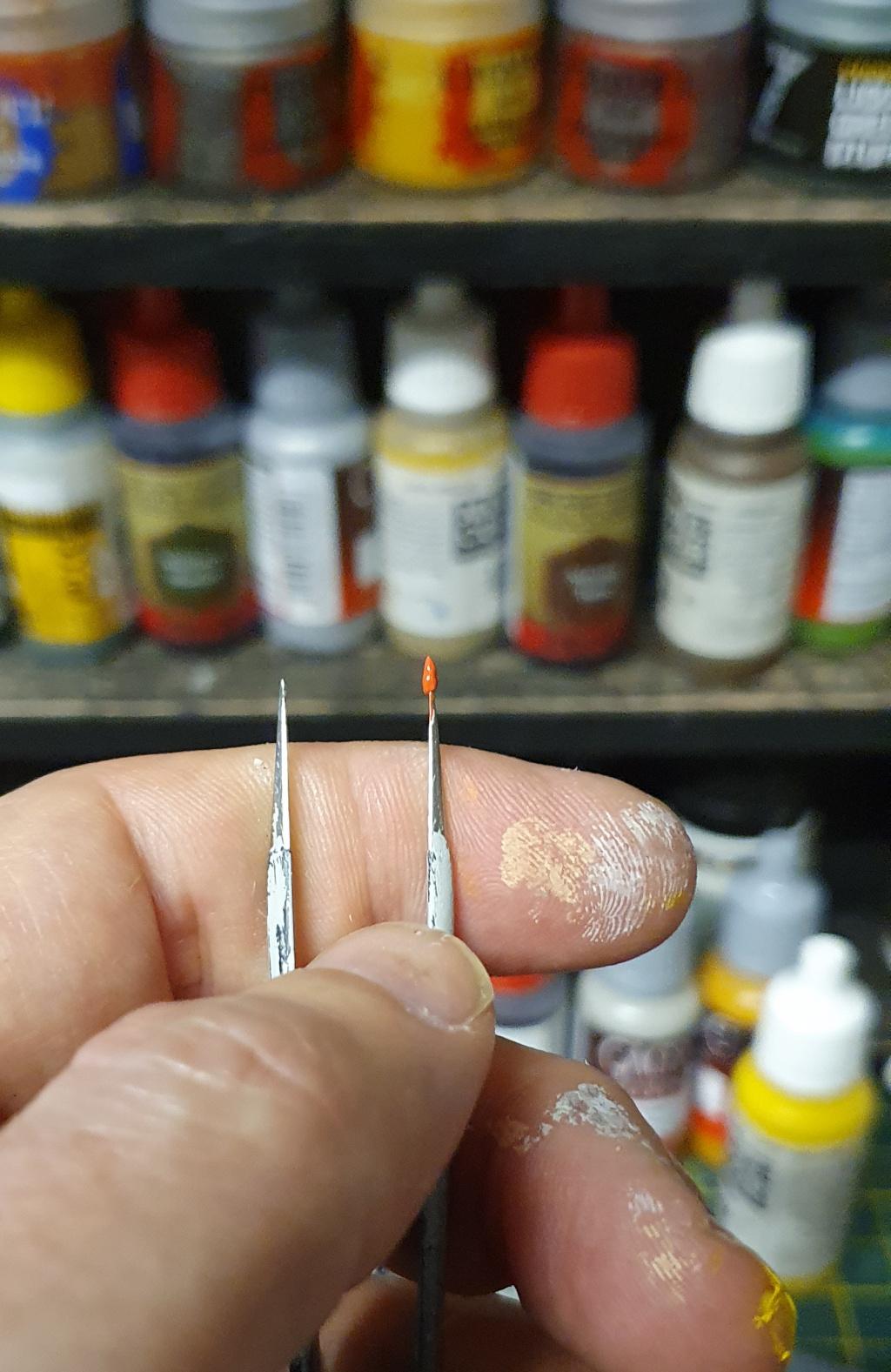 This was glued to the middle of the face with a tiny amount of Superglue dabbed on with the point of cocktail stick.

For the arms, I used some Seafoam from my tree and bush stock pile although any small garden twigs could work.

These were VERY gently pulled apart to get the form I wanted and then, like the nose, Superglued  into place. 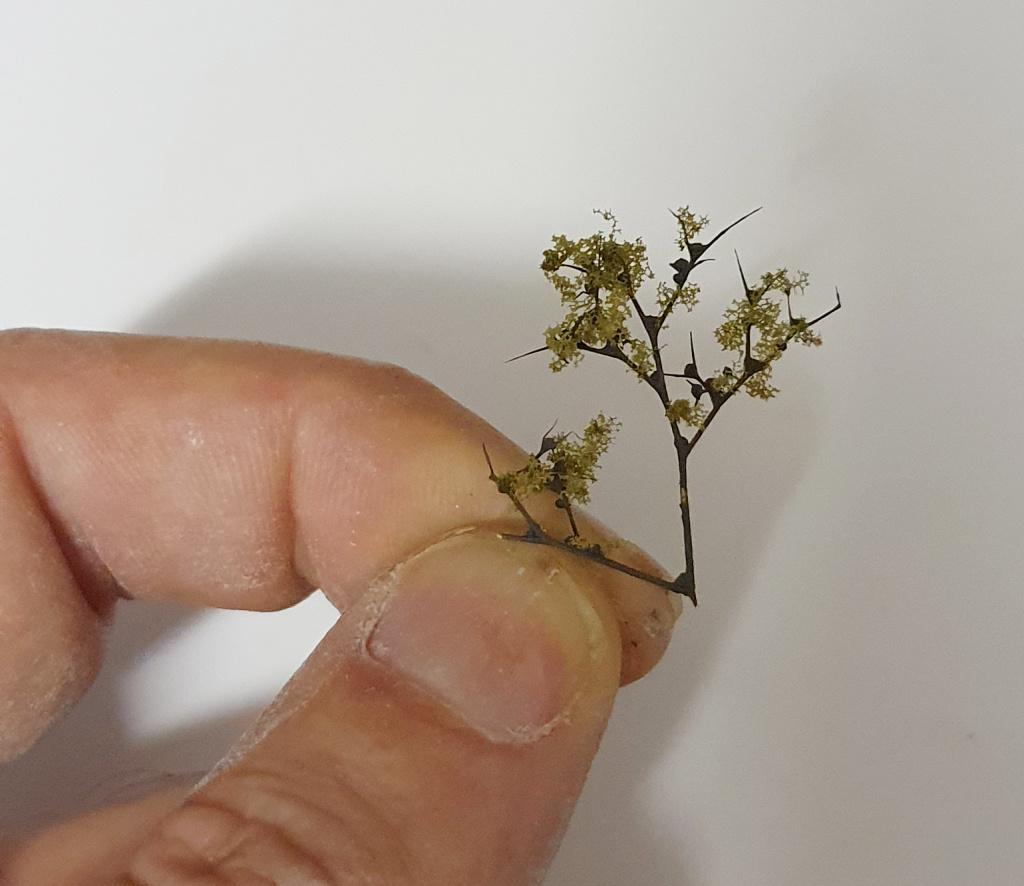 And that’s it. I’m very pleased with my little figure and will be making a lot more. Without the false starts I initially made, it doesn’t take long and they’ll look great alongside my Hornby Christmas train set under the Christmas tree.


>A final, personal, note: I spend a huge amount of time testing, photographing, writing and researching techniques for these articles and pay for all the running costs of MRE out of my own pocket. If you found this article useful you can support me by making a donation on my fund-raising page. Thanks and happy modelling, Andy.
Affiliate notice: Some links on this page will take you to carefully selected businesses, including Hornby, B&Q, Rapid Online, Amazon, eBay, Scale Model Scenery and Element Games, through which you can buy products mentioned. These links are made under their affiliate schemes which means that although the price to you doesn't change I get a small commission on the orders you place. Please see the disclaimer for more details.
Updated:Monday, December 20, 2021