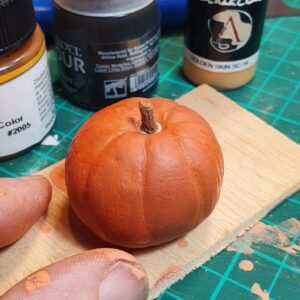 Possibly one of the cutest miniatures I’ve made.

Carving faces into pumpkins with my now not-so-young sons in the run-up to Halloween has become a bit of a tradition in my house.

I’m not really one for scary imagery, this year’s pumpkins were friendly faces and in previous years you’ll be surprised to learn I’ve even had train-themed pumpkins on my doorstep (trains from Model Railway Engineer? Surely not!). But whatever the image, pumpkins in October are definitely a thing in my house.

And so it was this year.

But while carving away a thought drifted into my subconscious.

I know how to carve pumpkins but could I make my own miniature gourds for decoration around the house?

Never one to let a challenge go, I had a few experiments — aka failed attempts — with various materials and techniques before settling on the approach here.

Here’s how I make these small pumpkins.

Shape the clay – size and shape

Firstly, take a chunk of the air-drying clay and pound and squash it for a few minutes. This softens the clay up, removes any air bubbles and ensures it’s one solid mass that won’t split or separate.

Shape this into a spherical oblong of the size required.

Natural pumpkins come in all sizes and shapes,  Some are perfectly round, some more oblong in shape. Some are small others very large, so the dimensions and profile it’s really up to you. 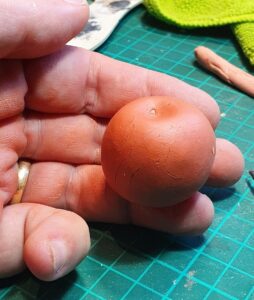 At 1:12th scale to the one, I was modelling it on. This is big enough for small displays around the house or on the porch/front step of a dolls house if that’s what you have in mind.

Once you’ve got the basic shape, flatten the bottom so it sits on a surface without wobbling and indent the top with a rounded or ball-shaped stylus. This indentation will be where the stem sits.

Now with a triangular-headed tool, score the seams, or lines of the pumpkin from top to bottom. I found it best to start in thirds, and sub-divide the sections until I had a natural-looking number of ribs.You may find the clay bulges as you press into it with the tools. This is normal; gently push in around the bulge and roll it in your hands to return it to the original shape although remember that pumpkins in their natural state aren’t of a uniform shape and some unevenness in shape can add to the realism of your miniature version.

A more troubling issue can be cracking.

Clay dries from the outside in, and as the outer surface dries it shrinks which can lead to cracks, even when working on it. Luckily, cracks can be easily sealed.

Take your finger or smooth cloth and wet it and rub-over the cracked area. The clay will moisten and slippery allowing the cracks to be smoothed over.

(If yours develops large cracks, dampen the inner surface of the fissure with some water and squeeze in a tiny slither of extra clay. Then use the above technique to smooth over the surface).

With the shape and ribs of your pumpkin made, leave it to dry. The bigger the clay being worked with the longer it will take to dry. In this case, I left it for approximately 24 hours at room temperature.

You might find more cracks appear as it dried. Just follow the above procedure to deal with these.

That’s a lot of pumpkins! 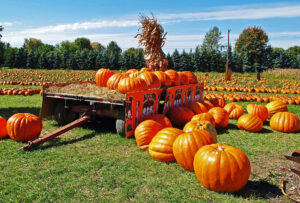 In 2020, over 28 million tons of pumpkins were grown worldwide, with China growing roughly 7.8 million tons, India coming in a close second at 5.1 million tons and the home of the little orange globes, the United States, harvesting 1.1 million tons.

How to colour your mini-kin

The air-drying clay I use is orange in colour to start with which says a lot of work but it wasn’t quite the right shade I wanted.

To achieve more realistic colouring, I used acrylic paints, mixing reds and oranges to get the desired shade. I use Vallejo colours but any acrylic paint would work.

For added effect, I applied a watered-down brown to the ribs to exaggerate their depth.

The last touch is the stem of the pumpkin. The woody branch from where they hang.

To make this I scurried off into the garden and collected some twigs.

Looking at real pumpkins, the stem is wider at the base, where it meets the flesh of the pumpkin, so I picked a curved twigg with a collar where spurs were emerging. This was cut just below the collar and glued into the previously made indentation using PVA glue.

Once set in place, some brown paint was dabbed on.

And that was my miniature pumpkin finished.

The end result is pleasingly realistic and receives a lot of friendly comments from everyone who sees them.

Now to see if I can make small carved pumpkins. They won’t be as cute and will be a lot harder to do than carving the real thing but I can’t resist the challenge. Watch this space.

PS: If you’re reading this in the run up to October 31st, Happy Halloween!


Affiliate notice: Some links on this page will take you to carefully selected businesses, including Hornby, B&Q, Rapid Online, Amazon, eBay, Scale Model Scenery and Element Games, through which you can buy products mentioned. These links are made under their affiliate schemes which means that although the price to you doesn't change I get a small commission on the orders you place. Please see the disclaimer for more details.

Photo: Pumpkins in a field. Photo taken by Rodney Campbell and used under Creative Commons License.