Level up your layout with the rule of thirds

If you’re designing a layout there’s a little rule you can apply that will dramatically improve the look of your trains and take your model railway to the next level.

I enjoy photography and one of tips I picked up early was the rule of thirds. Essentially, it’s a composition rule by which artists – typically photographers – use as a guide when composing images.

In it’s simplest form, an image or scene is divided into nine equal parts by two equally spaced horizontal lines and two equally spaced vertical lines, with the important compositional elements be placed along these lines or the intersections of the three areas. The theory is that aligning a subject with these points creates more tension, energy and interest in the composition than simply centreing the subject. (Wikipedia).

This side-by-side photograph of the same scene illustrates this. See how placing the subject of the picture on the first third line (in the right hand photo) adds to the image.

(If you’re interested there’s a useful walk through of the concept from a photography / artistic perspective here).

And given how visual trains are it shouldn’t come as a surprise that there’s also a rule of thirds for railway modelling.

For layouts the rule of third says that design should result in trains occupying no more than a third of the visible space on a layout.

One of the best explanations is by Richard Beardsley in Planning, Designing and Making Railway Layouts in a Small Space:

“the idea behind the principal is that the train needs to be within the scene not occupying the entire scene.”

Continuing, “The worst violation of the principal would be where the the scene is smaller than the length of the train so that it is impossible to see the entire train at once.”

Using this rule brings balance to the layout and allows the viewer to focus on what’s important – a train – but ensures your scenic work or cityscape isn’t lost and results in much better looking layouts. 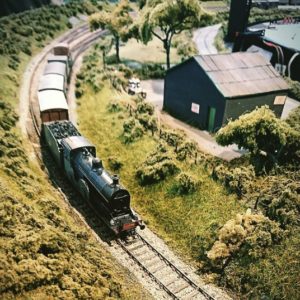 This picture and layout perfectly illustrate the rule of thirds in photography and model railway scenes.

To see this in action, look at the picture left from a recent post on my best track laying tips.

It perfectly illustrates both points.

As a photograph the engine lies on the intersection of the bottom and left most third (just for interest the building also lies on opposite another intersection and neatly balances the sweeping curve of the train).

As a layout scene the train occupies under a third of the total area. It looks great and feels just right. The train is the centre of attraction but doesn’t dominate.

Of course it’s not vital you follow this ‘rule’.

As another rule says, it’s your layout and you can do what you want on it after all.

And Richard also points out that if you’ve ever tried to photograph real trains you’ll know there are plenty of situations where a suitable vantage point allowing the entire train to be seen cannot be found so this even true life breaks the rule.

It’s a simple rule but one that if you do choose to use can give your layout extra kick and take it up a level.