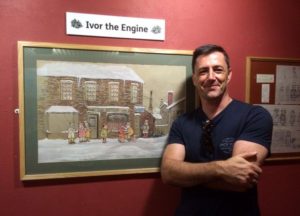 How a wedding invite revealed the source of my life long passion and an exciting extension to my layout.

Last weekend was the wedding of a friend of mine. Actually, a friend of my wife but you get the idea. The festivities were held in Canterbury and we spent a lovely Saturday evening dinning and dancing into the wee small hours.

Why do I mention this here?

Take a look at the delightful cupcakes hand-made by the bride: London Underground themed cup-cakes! Delicious wow upon wow! 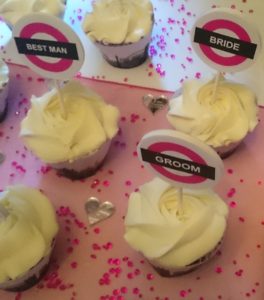 These alone would warrant a mention here but what made this trip to Canterbury worthy for inclusion on model railway engineer was what came the following morning.

With a few hours to spare before returning we took a slow stroll into Canterbury town centre and dropped by the local museum.

The Canterbury Heritage Museum is a treasure trove for history lovers spread over several floors of winding passages in a 12th century Poor Priests’ Hospital. And on turning one of the many dark corners I walked straight into my childhood.

Oliver Postgate was a 1970s children’s TV impresario and together with fellow Canterbury-based business partner Peter Firmin created some of the most memorable kids TV programmes of the era, including the Clangers, Bagpuss, Noggin the Nog and, of course, Ivor the Engine.

Looking around the exhibit to these two TV heroes I was in childhood-memory bliss.

If you’re not familiar with Ivor it’s the gentle story of a steam engine called Ivor, his driver Jones the Steam, the station master, a little dragon and the other inhabitants on the imaginary Merioneth and Llantisilly Rail Traction Company “in the top left hand corner of Wales”. It’s accurate too, with Ivor being fired in the morning and correctly set signals. Lovingly written, drawn and animated by Oliver and Peter it’s fun, innocent, children’s TV at its best. If you know a small child who likes trains I can’t recommend it highly enough. The DVD boxset is still available on Amazon.

I’ve mentioned before how Ivor, and the railway at the bottom of my parents garden, shaped my lifelong love of trains but I never really appreciated the impact the wonderful little TV series continues to have on my model railways until I glanced at the stills of the show in the museum and re-watched some of the episodes that evening.

There in 5-minute sequences of animated cardboard cut-outs are all the aspects of railways that I most enjoy. Tank engines, engine sheds, signal boxes, water towers and mine works fill the screen. Lovingly bought to life in flickering stop-motion.

Subconsciously my miniature railways are a trip back to the happiness of my earliest childhood – glued to the TV watching Ivor’s adventures.

I wonder how many other model railway builders can trace their hobby back to Ivor or other train themed TV programs they watched as a child? I’d love to hear what your train passion beginning was!

But the model building interest at Canterbury didn’t end with Ivor,  Jones the Steam, Dai Station and Owen the Signal.

Talking a further look around the museum, I came across an exhibit on the Canterbury and Whitstable railway .

This railway, built in 1830, was according to the information: “the world’s first passenger steam railway”. And sitting, proudly at the heart of the display was none other than Invicta, the locomotive built by Robert Stephenson. He built this immediately after the world famous Rocket and had it shipped by boat from Newcastle for the Canterbury line on which his father was the chief engineer. Touching an engine built 187 hundred years ago by the father of railways was a truly special moment.

What appealed more however was the track plan for the line hanging on the wall next to Invicta. 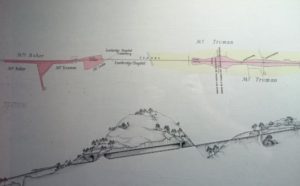 Part of the beautiful map of the Canterbury & Whitstable railway.

This wonderfully drawn map of the 6-mile single track railway reveals what a feat of engineering the line would have been. Built right at the start of the railway era, George Stephenson (as chief engineer) would have had to invent many of the methods needed in its construction. Just imagine trying to design and build harbours, bridges, viaducts, impossibly steep gradients (1 in 56 at one point) and a half-mile long tunnel with no guides, prior examples or techniques to work from!

It’s would be great to build a model of this line and I decided then and there to add it as a section to my bigger Great South layout. This N gauge layout is a representation of the railways of South England so the affectionately known ‘Crab and Winkle Line’ can legitimately be added as a great end board to the Kent section.

It was while contemplating this addition that it dawned on me that here is a line with all the bits of railways that the Ivor exhibition in the very next hall had revealed were the source of my favourite aspects of model railways.

An invitation to a wedding had revealed the childhood origins of my lifelong passion and shown me the perfect railway to model and build next. Happy coincidence?