If you’re a bit pushed for space and want a fun model railway to build and operate, Inglenook shunting puzzles are a popular choice.

The Inglenook puzzle was devised by Alan Wright in 1979 to provide an operational interesting challenge in a small space.  It follows other shunting puzzles including Sam Lloyd’s Primitive Puzzle (where an engine and four cars meet an engine and three cars on a line with a siding large enough to hold just an engine or one car – the puzzle being to find the most expeditious way of passing the two trains).

In an Inglenook puzzle, a collection of eight wagons sit in three sidings which fan out from a limited length headshunt (lead track). The aim of the puzzle being to rearrange the wagons into a desired order. With limited space in the sidings (five in one and three in the other two) and three plus the loco in head shunt.

As such, they provide a rich, entertaining, operating layout in a small space. The very name Inglenook coming from the fact that Alan’s original  “occupied the space beside the chimney breast, the inglenook” (December 1992 Railway Modeller).

But what of the surroundings? How to create an inglenook that looks good too and perhaps even based on a real world location?

Alan Wright’s original puzzle was based on actual railway line, the Alnwick-Cornhill branch (Coldstream branch) of the North Eastern Railway NER but I’ve found another one.

While researching the Pentewan narrow gauge line in Cornwall I was looking at a map and noticed that slap bang in the middle of this fascinating line is a ready made inglenook puzzle.

A close up of the map showing the basis of inglenook is shown below. 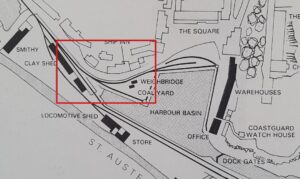 The three lines in the red box are ideal Inglenook material. With a little work, this can be made into a nice little layout with harbour, coal yard weigh bridge within the inglenook itself and plenty of other buildings around it if wanted.

The track plan for this should be self explanatory. Just mirror the plan given the definitive site for inglenooks, wymann.info, seen below, setting the length of the three sidings to be enough for five and three wagons respectively and move the point in the top left hand corner further towards the other point to create a headshut long enough for three wagons and a locomotive. Just space them out to reflect the Pentewan harbour plan.

The Pentewan railway operated with steam locomotives initially and later using a diesel shunter (for brick and sand production) so can be modelled credibly in steam or diesel. N, 009 or OO gauge would all fit within a 3ft baseboard.


> A final, personal, note: I spend a huge amount of time testing, photographing, writing and researching techniques for these articles and pay for all the running costs of MRE out of my own pocket. If you found this article useful you can support me by making a donation on my fund-raising page. Thanks and happy modelling, Andy.
Updated:Tuesday, October 27, 2020