How To Use Animated Action To Make Your Railway Come Alive 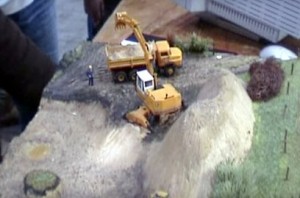 Looking for a way to bring your railway to life and add interest? Animated scenes are the answer.

I’m a great fan of using scenic animations, small diorama’s with moving elements, to bring otherwise static aspects of a railway to life. I’ve seen them on a few layouts, have used them on previous layouts and hope to incorporate them in my small Cornish layout to create a “working” beam engine in a tin mine. The challenge is coming up with ideas. Hopefully, the following will inspire.

What’s possible is only limited by your imagination

Some great ideas can be seen on Rick Spano’s N gauge Sceniced and Undecided Railway of which he’s kindly posted videos here.

This is one of the videos showing two shop ceiling fans in operation. This particular animation was created by modeller David K. Smith but is now used by Rick.

There’s really no limit to what can be created and I love what Rick is doing with them but perhaps the ultimate demonstration of animations is on Miniatur Wunderland. I’ve captured a few of their animations in my Youtube video below.

And it’s not just Wunderland doing it across the Channel.

For some reason, animations seem a lot more popular on European model railways (Modell Eisenbahns) than in England.

This video from the Eurospoor exhibition shows just how popular — this is from 2004.

(Just for the record, it was watching the pump in the first of the two videos above that gave me the idea for a working tin mine — the beam engine should be pretty similar arrangement).

Made With Motors and Magnets

Making them is essentially a matter of hooking up motors and magnetic switches to wires that pull, lift or move or drive models directly creating animated action. It’s really no more than is done for points and point motors but on a much finer scale.

Alternatively, systems such as the Faller road system use alternative movement mechanisms. This uses magnets to steer vehicles and motors in the cars providing the movement, as seen in this explanatory video:

This system can also be used for other forms of transport as well. I know of one layout under construction that will use the Faller system to move a canal barge.

Of course, they don’t have to involve motors. You could just use lights — perhaps a flicking red LED to simulate a bonfire or the firebox of a steam engine although this is probably only viable at HO scale.

How do you or could you use animations on your layout? Share your examples in a comment below.


>A final, personal, note: I spend a huge amount of time testing, photographing, writing and researching techniques for these articles and pay for all the running costs of MRE out of my own pocket. If you found this article useful you can support me by making a donation on my fund-raising page. Thanks and happy modelling, Andy.
Updated:Tuesday, February 9, 2021