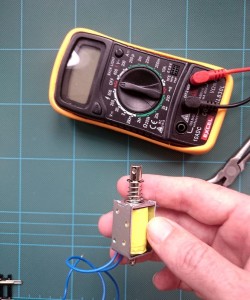 After a recent slight miscalculation with off-the-shelf point motors I started thinking about making my own point motors. How difficult could it be and would it be cheaper?

Having remotely operated working points makes a railway a lot more fun and enjoyable but it’s not cheap. Point motors go for around £7 to £10 each, if you’ve got a fair number of turnouts on your layout that can quickly mount up.

Also, the standard point motors are aren’t the most flexible when it comes to positioning. Surface mounted motors (such as Peco PL11′s or the Hornby equivalent) need to be next to the point while under board motors need to be directly below the point and even with extension pins there’s a hard limit on the depth of the baseboard through which they reach.

I ran into exactly this problem with some Peco PL-10E or PL-10WE point motors recently. They worked find but a couple of the points on my layout where right up against supporting joists on the underside of my baseboard and by the time I’d added the mounting bracket for the motor wouldn’t fit where it was needed.

This was down to my own fault and stupidity and no reflection on the Peco motors which I’d otherwise not had a problem with but it set me thinking.

Could I MacGyver my own point motors from solenoids (electro-magnetics that can be switched on and off and with the magnetism used to move a metal connecting rod)? Doing so would give me more flexibility for their position. Just as importantly, solenoids are available on eBay for around £3. That’s a good saving if they could be made to work.

First things first I ordered a couple of solenoids off eBay. These cost just over £3 each and there are sellers doing bulk packs reducing the unit cost even more but to start with I just went for a couple of 12V units (I went for 12V as these would work with a transformer I had spare).

Then it was just a case of connecting the two wires from the solenoid to a switch and the transformer. A bit of soldering and a quick test run showed the basic motor working giving a pleasing clunk when powered. Applying the switch activated the magnetic pulling the rod in one direction. A spring returned the pole to its original position when unpowered.

The fiddly bit was connecting the rod to the point.

After experimentation, I found some suitable 2mm wire from a craft shop (40 meters for £2.49) that fitted into the hole on the moving tie-bar of the point, was flexible enough to be bent around and secured to the motor rod while also being rigid enough to push and pull the point when the motor operated.

It worked and here’s a quick video showing it in action on part of my workshop layout. When done for real on a layout the wire would be held in place, but loosely so allowing it to move, and disguised as would the solenoid.

The great thing about this DIY point motor, other than the price of course, is that the wire can reach further than the connecting assembly of commercial point motors giving more flexibility as to where the motor can be placed relative the point.

Admittedly, these solenoids are physically larger than the Hornby and Peco products but for under board mounting they’re fine and as they can be positioned further away from the points they can be hidden in nearby buildings or perhaps scenery fixtures if mounted on the surface of the layout.

For full operational use on a layout a capacitor discard unit, such as those from Block Signalling, would be used (as it would for commercial points) to prevent motor burn out and provide a single high current pulse to the point but for this adventure in DIY point motors I’ve let it go. I might revisit this post in future with an update on this aspect.


>A final, personal, note: I spend a huge amount of time testing, photographing, writing and researching techniques for these articles and pay for all the running costs of MRE out of my own pocket. If you found this article useful you can support me by making a donation on my fund-raising page. Thanks and happy modelling, Andy.
Affiliate notice: Some links on this page will take you to carefully selected businesses, including Hornby, B&Q, Rapid Online, Amazon, eBay, Scale Model Scenery and Element Games, through which you can buy products mentioned. These links are made under their affiliate schemes which means that although the price to you doesn't change I get a small commission on the orders you place. Please see the disclaimer for more details.
Updated:Monday, December 20, 2021