Home » Model Railways » Layout Construction » Tunnels, Inclines & Cuttings » How many inches in height do I need for my incline

How many inches in height do I need for my incline 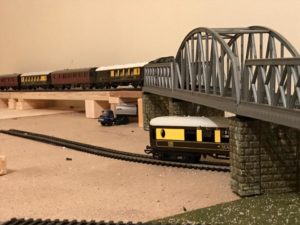 Confused about inclines and how many inches you need to raise your track to go over other track? Here’s what you need to know.

I’ve covered inclines before but it’s still a common question here and on this site’s companion community. Member ‘TimberSurf’ recently elaborated on this with a post on his website. It’s an interesting article and is reproduced here with his kind permission.

When trains go up (incline) or down (decline) a hill, the angle is referred to as the gradient, sometimes shortened to the word Grade, commonly understood as a slope.

Although in maths it would be called the angle from horizontal, engineers for roads and rail express it as a ratio or percentage. The ratio is the amount the gradient increases in relation to the distance along the horizontal, expresses as 1:100 as an example. Similarly, it could also be expressed as a 1% slope or grade. 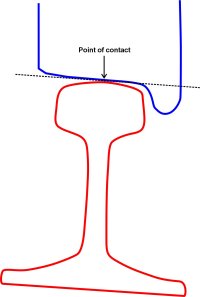 Why is gradient so important?

A car’s tyre has a large surface area of contact with the tarmac, it is wide and because it is pneumatic, the bottom flattens out as it rolls to give a larger surface, it is made of rubber which has good adhesion to the rough tarmac.

In comparison, a train wheel to rail is metal to metal and the area of contact is very small. This means that the rolling friction is very small, allowing great weight to be supported and little effort required to get the load rolling.

However, this also means that the driving wheels have very little traction. On the flat, they work very well, but it equally when excessive power applied the wheels can slip.

This has two effects, one that acceleration is limited by the trailing load and two that there is a reduction of traction as an incline increases.

This is demonstrated when an engine is seen to wheel slip if too much power is applied when starting at a station and the fact that a banking engine is required with heavy loads up a steep incline.

So what is normal?

There is no set maximum grade, different railways/countries/era’s had a wide range.

But anything much more than 1% (1:100) would be deemed as steep, there are some instances of as steep as 1:40 or slightly worse, but these are few. There are some exceptions like hump shunting and coal loading ramps and narrow gauge is a whole other ball game but most mainlines rarely go above more than 1:100.

How does this translate to model railways?

Like the prototype, there is no fixed rule. Gradients simply scale and are much the same.

If you have a 1% gradient, you will not have any problems. Unfortunately, that means we need 33ft (10 meters) just to elevate a track above another line!

To cross a railway, you need the height of underlay, track, tallest rolling stock plus thickness of bridge/tunnel above it, ranges from about 3-4 inches.

Hornby will make you believe you can make an overbridge in 180° on 2nd radii! I doubt you would get an engine and two carriages to make at full tilt, even with a run-up!

There are lots of figures out there ranging from 1:30 to 1:40, but even these are debatable.

Even 1:60 will cause wheel slip if the train is long (8 carriages). One solution is to use ‘DCC Concepts Powerbase’, but that means fitting magnets to every loco.

My current design will be 1:72 (I will run very long trains with strong loco’s!)

(Having a curve on the incline will adversely impact, reduce, the pulling power too so you’ll need to allow extra length at top and bottom for the transition from gradient to flat.)

What will work will also depend on the effective traction of your loco.

The more driven wheels the better and the more weight the better.

Older loco’s (not all wheel drive and lighter) will be outperformed by modern purchases. Setting up a temporary inclined track and testing YOUR Loco’s is the only sure way to determine what you can get away with.

Inclines can be problematical, if you just want bridges and tunnels, consider setting the rails 4 inches above the base sitting on contoured raised hills and embankments and just have scenics and roads at the lower level and go under it.

In conclusion (in general and not a rule)

TimberSurf’s original post is reproduced here by kind permission. Top picture by Paul Mcmanus of his railway and copyright Paul, other words and pictures remain copyright of TimberSurf”. You can read the original post and more about his layout ‘Lumsdonia’ on his website here.