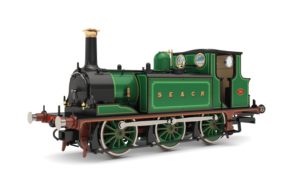 2019 looks to be one of the most exciting years for Hornby judging by launch plans revealed yesterday.

In an announcement made on January 7th, Hornby announced five brand new locomotives, four carriage sets and two new brake vans, new liveries plus the return of some popular favourites and at some attractive prices.

The full details are on the Hornby website but this has been experiencing problems – undoubtedly due to the number of people trying to see the new range — so I’ve reproduced the main highlights below.

For the full details visit Hornby.com