Home » Projects » Hidden Away – the genesis of a quick mini project

Hidden Away – the genesis of a quick mini project 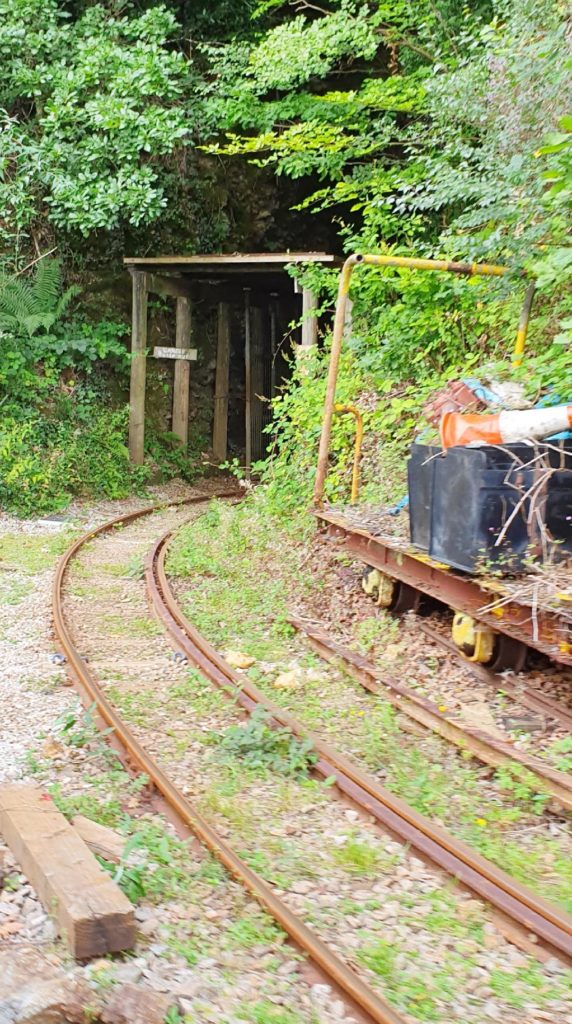 Hidden away behind a wall of trees, perched half way up a hillside, on the banks of Tamar in deepest Devon, is a small railway.

Even calling it a railway is a stretch of the imagination.

It’s a ramshackle affair. A beaten up and broken down old line where a tiny, tired, old diesel pulls converted wagons containing holiday makers on trips into the dark unknown of the hillside to see an old Devon mine.

There are no shinny locomotives or picture perfect stations here but it is a railway.

On the short distance of track were the trains emerge from their underground journeys, there’s an old shed, a hoist and all manner of railway debris scattered on and alongside the track. 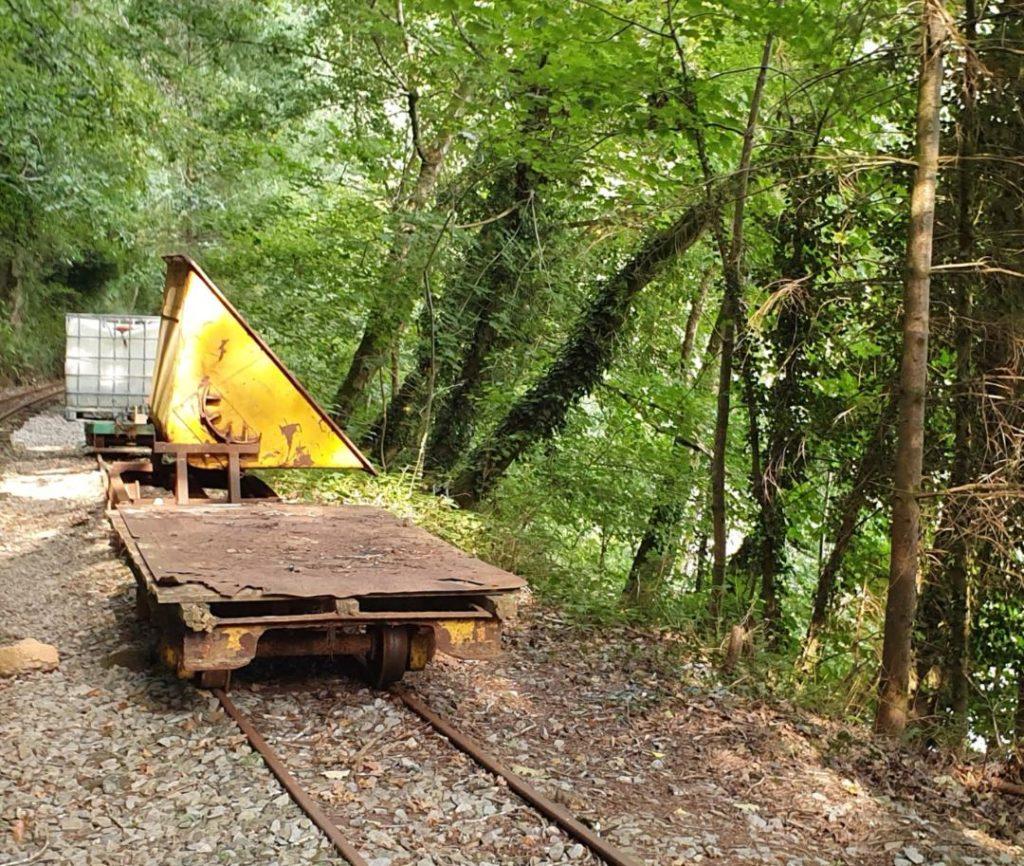 Old tipper wagons, rails and assorted wagons sit around waiting for the rust to reclaim them.

For scenic and industrial decay modellers it’s a delight.

I visited it last year completely by chance while on holiday (thanks to my wonderful wife who spotted the advert for the mine-train ride and thought I’d like to go) . And when recently contemplating a quick, small build, project to keep my hand in while my main layouts are out of action it sprung to mind.

(For those interested, it’s near the Morewellham Quay, itself well worth a visit if you’re into West Country industrial heritage).

I’ve set about recreating it in HOe scale (9mm, N gauge, track with OO scale models). This diminutive track size will allow an oval of track and a single siding on my recently acquired “baby baseboard“. As mentioned, most of the track will sit unseen inside a hill,  emerging from a timber frame mine entrance where it meets a shed, hoist, and other junk and track side rubbish before disappearing into another mine entrance in the tree covered hillside.

The track work is standard Peco 009 crazy track. I’ll use an Eggerbahn HOe diesel loco with some flat wagons for rolling stock but apart from that everything is scratch built. Control will be DC — it’s really not worth going DCC for a oval layout with one engine and a single point. 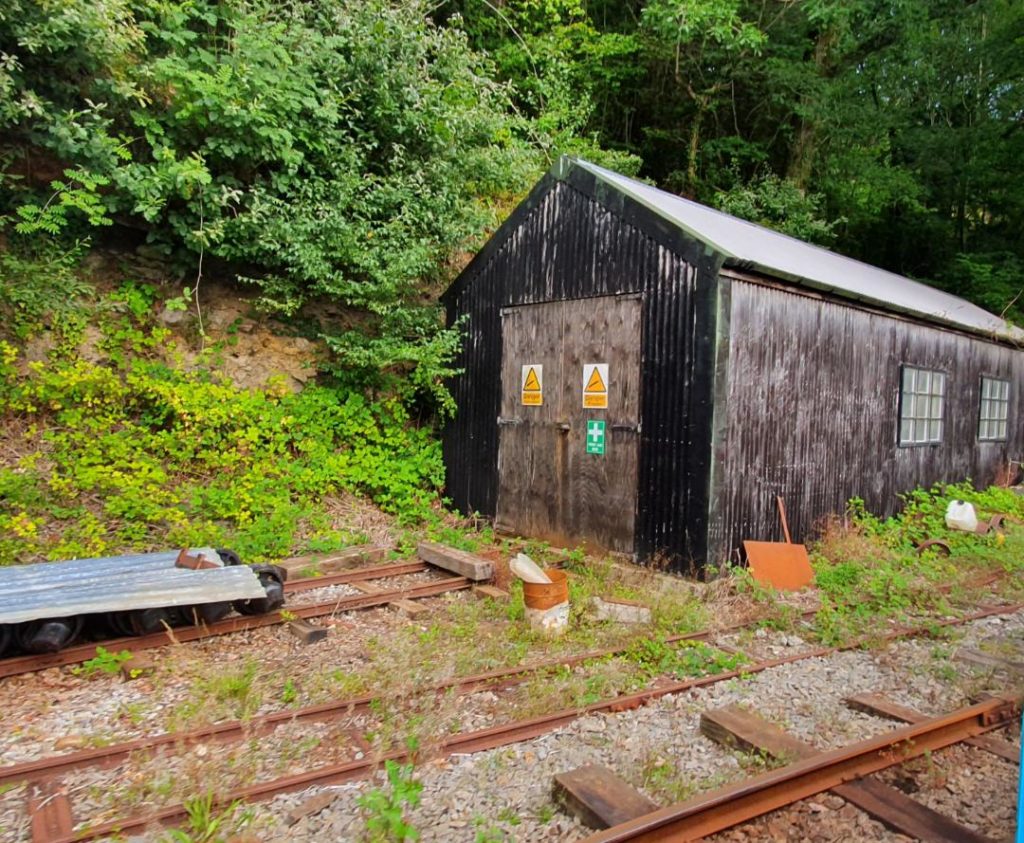 The shed, seen here, will be constructed from Wills corrugated sheet and Polyurethane (plastic film) for the windows.

I’m not sure what I’ll use for doors and any suggestions for the hinges are welcome.

Just up from the shed, is a hoist — it’s just visible to the left in the photo of the shed here. The legs and girder for this will be Evergreen strips. The gear mechanisms, chains and hooks are left overs from various of Langley kits. 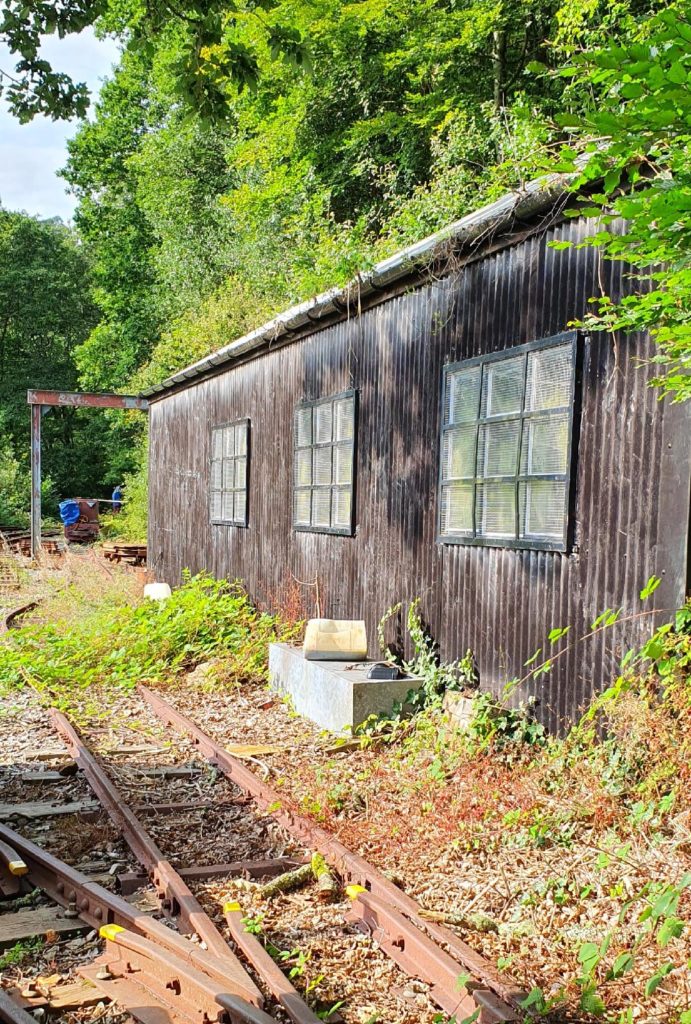 A second hoist, a sits on top of an old mine shaft entrance. 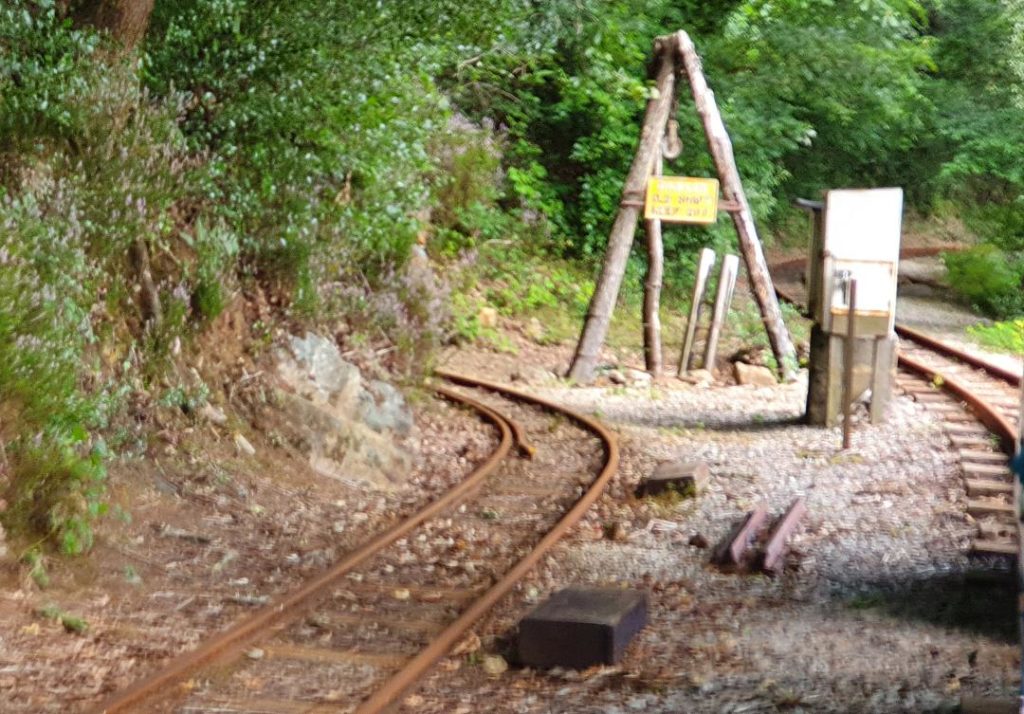 The second hoist, over an old mine shaft – it even has a sign saying ‘old shaft’ on it – complete with ladder leading down into unknown depths.

The positioning of this mine between two sections of track is interesting and surely predates the track? I’ll make this from long match sticks roughed up to given an uneven look and coloured a more natural grey.

Track side abandoned rails  and sleepers are bits of cut off Peco track; the tipper wagons and abandoned wheels / axels are from rolling stock spares.

Landscape and hills is from foam packaging I’ve acquired during on-going house moves; with trees and plants to be hand made as I go – rubberised horsehair, etc. As the photo below show, for further up the hills only the top canopy of the trees will be visible so I can use this tip for quickly creating dense woodland from expanding foam and avoid the need to create lots of trees. 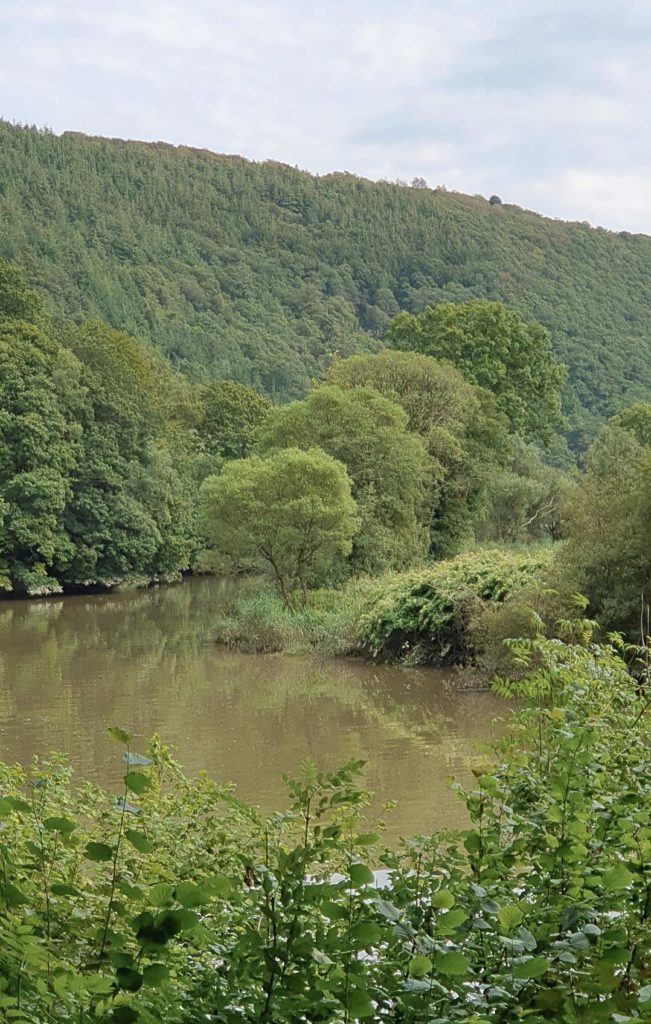 The river runs down the hill, below the railway. Only a small part of this will be on the layout 🙁

Being set in a small area, I won’t have much space for the river but will show a small part of it, which as normal will be created from PVA using my standard water techniques.

Completing the scene, a gully and drain will carrying water under the track to a runaway down the hill leading unseen to the river. 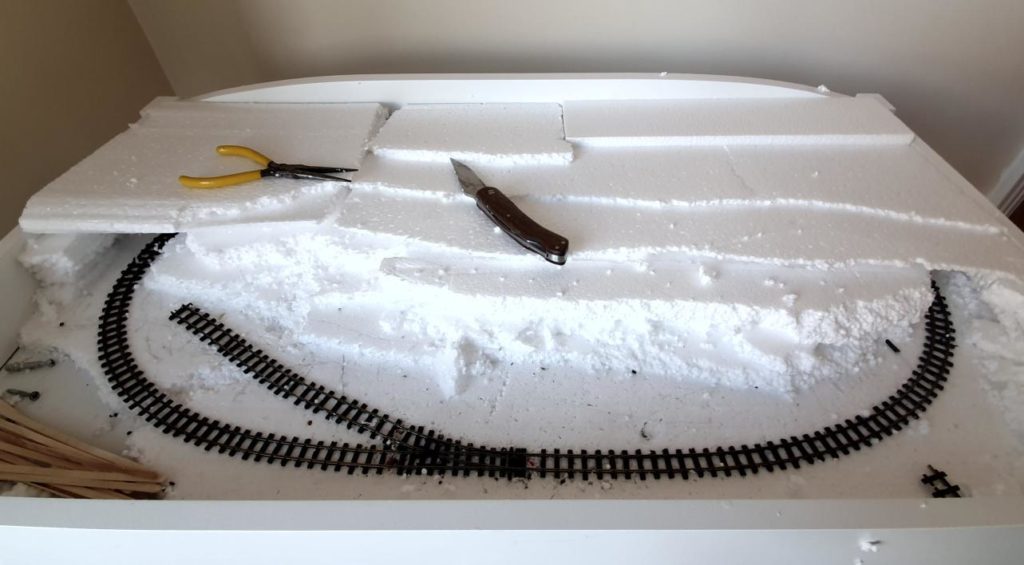 Track down and wired; initial landscaping of the hill for my quick mini-project is underway.

The beginnings are all already in place, with the track laid and basic landscape formed. Next up will be creating the top of the hills and tree top, and wooded beam tunnel entrances, seen in the top photo.

This lot will hide much of the track — just as it is in the actual railway — but apt for a layout based on a railway hidden away from the rest of the world.