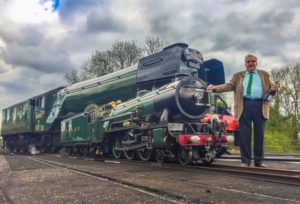 History was remade on Thursday when the legendary Flying Scotsman was reunited with its little sister, the 1/3rd scale replica Typhoon, for the first time in 90 years.

The two were last seen together in May 1927 when, as publicity for the Typhoon being delivered to the Romney, Hythe and Dymchurch miniature railway, the world-famous Flying Scotsman posed with its miniature doppelgänger at Kings Cross.

The event was particularly meaningful for Sir William McAlpine who rescued Flying Scotsman in 1973, having already saved the RH&DR line from near-closure in 1972 and was present on Thursday to break open a ceremonial bottle of Champagne to celebrate the occasion.

Thanks for @MrTimDunn and the Steve Town, aka thestig.co.uk, for permission to use the photo above.