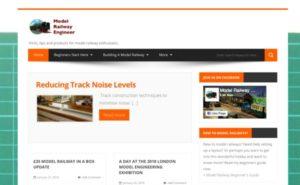 It was time to change and it needed to be done.

All the tips, information and photos remain but it is, I hope you agree, faster, easy to navigate and with a clean, more modern, look.

It’s the first major update in 4 four years and was long overdue. 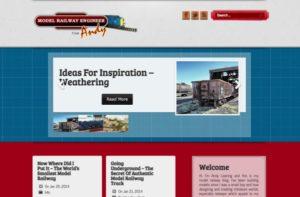 The original design, it’s come on a long way since.

Here’s what’s changed and why.

The design has always been a fundamental aspect of our favourite trains and I wanted Model Railway Engineer to reflect the clean, elegant styling of our greatest locomotives.

Further, I and many readers of the site, are also not getting any younger so I spent quite a lot of time on the accessibility aspects of the new design to make it easier to read. The contrast of the text to background colours have been heightened, clearer fonts used and letter and line space sizing increased.

I’m still tweaking the look and more small improvements will be made over the next few days but, hopefully, you’ll agree it’s cleaner and fresher and it’s now easier to find the tips, articles and information you want.

The great engineers of railways past never settled for slow trains and I wasn’t going to settle for a slow site that it had become of late.

According to Pingdom Page Speed, a tool used to measure page load times, the previous version of the site was scoring an appaling 45 out of 100 for performance and on a bad day could take around 20 seconds!

This is partly because the number of people visiting and using the site has increased massively with visitor numbers increasing every month last year and December smashing the sites all-time records by 32%!

But whatever the reason it wasn’t acceptable and it wasn’t giving you and other visitors the experience I wanted.

The site was hosted in Texas but it’s now been moved to a nice shiny new server in the UK and this, with the updated design, makes it much much quicker to load. The Pingdom speed rating has now shot up to 95 out of 100 and load times have been slashed to between 2 and 6 seconds.

This is still slower than I want and I’ll be tweaking it further in coming weeks, but it’s a huge improvement over where it was previously.

The site was also starting to become unreliable as some of you may have noticed. For reasons, I won’t go into why but the design would regularly break and there were even occasional server errors.

A lot of bugs have been corrected, the new design code and new server should solve this and ensure the site is available when you want it to be and not when the hardware decides to work 🙂

What do you think of the new design? Does it feel faster? Can you find information more easily? Please say in a comment below.