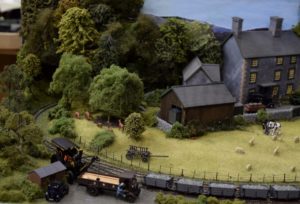 Curves and bends make model railways more fun and allow continuous running but they come with a problem.

It’s just not possible to fit every facet of full-size railways into a scaled down version without compromising on some aspect or detail. And, most of the time this is fine.

But, in some cases, it can ruin the look of a layout and spoil all the hard work that’s gone into the rest of the model railway. Nowhere is this truer than with bends.

The bends and curves that model trains run around are typically very tight, with a restricted radius far smaller than you’d ever find in real-life – prototypical – railways.

And even following one of the golden rules of model railway, create the widest curve possible, it’s still going to look odd.

And even if you the curves look good, as in the Glyn Valley Tramway 009 layout seen above, they are often used to exit the layout to fiddle yards, so it’s useful to disguise them and hide where they exit the layout.

The easiest answer to these challenges is to hide the curve. Here are the common techniques used in display layouts to do this.

Hide them in hills

Burying bends in a hill or mountain with a tunnel is the surest way of ensuring no one notices an artificially tight curve.

Safely hidden in a tunnel no one will notice that the curves look odd.

The downside, of course, is that your trains disappear from view while in the tunnels and if curves make up a big chunk of your trackwork that’s a lot of train action you’re going to lose out on.

There are also construction gotchas that need watching out for.

Notably, make sure you leave access holes so you can reach the trains when deep inside a tunnel.  The problem is that as the curves get tighter there’s greater opportunity for derailments so you’ll need a way to correct any rolling stock that runs astray while inside the hill.

I did this, much to my chagrin, recently. I neglected to incorporate an access way into a hill during the build and shortly after completion, my Mallard derailed on a run. With no access, I had to pull up the hill to get to it. Idiot! And very frustrating.

Also, remember to leave more than an adequate clearance between the track and tunnel walls as rolling stock pokes out more than might be expected while travelling around a curve. A simple tip is to attach a pencil to the site of a coach or wagon so it leaves a line on the baseboard as it travels around. Then build the tunnels so the walls are comfortably beyond this line and you’ll save yourself a lot of frustration.

I wrote about making tunnels here.

Cover in a cutting 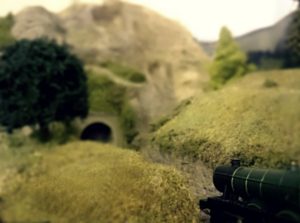 A cutting on my N gauge layout. This masks the track but leaves the loco visible.

If you, understandably, want your trains to be visible as much as possible and not lost in hills cuttings are a great option.

A cutting through a slight mound or low hill allows the track work to be covered while still leaving the trains visible.

These are my preferred option most of the time.

Having low hills and mounds on a landscape also adds credibility, landscapes are never flat after all.

Another common technique is to obscure troublesome track work with bushes and trees.

The theory is the same as for cuttings. Place low lying bushes, hedgerows and even trees in front of the track so the curvature isn’t so apparent but you can still see the trains amongst the trees or over the bushes as they pass around the bend.

This is arguably the easiest of the approaches here to do.  Just make sure you build out the vegetation in patterns and shapes that don’t follow the curve.

Bushes and trees can be made very cheaply so this is the lowest cost option. My tutorials on how to making bushes and the guide to low-cost trees are very popular.

My final technique is to hide the track behind man-made objects – buildings, walls and the like.

Leaving gaps between building through which the trains can be seen creates a nice visual treat but allows you to obscure the worst of the curve.

If you place buildings on both sides of the track, it’s important to leave sufficient access either side of the track for both the trains to pass and to get your fingers in between to extract errant trains, as is the case with all the track tips here.

Which of these techniques will you use to improve the curves on your model railway? Share your plans in a comment below.