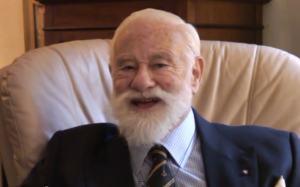 During the 1970s, 80s and 90s he became a well known face on British TV audiences during with his own TV show Model World, regular appearances Tomorrow’s World and occasionally Horizon and co-presenting Making Tracks.
His love and enthusiasm for models, and trains in particular, shone through in his programmes and combined with his close involvement and attendance at numerous model railway exhibitions made him an inspiration for a generation of modellers, including myself.
Unlike many presenters, he had a genuine passion and real knowledge of his subject and was a skilled engineer having a Gauge 1 and later a 10¼ railway in his garden (which was occasionally opened to friends and fans) in Surrey. He was also president of Guildford-based Astrolat Model Railway Circle and set up the Institute of Patentees and Inventors.
Bob is survived by Sheila, and by his daughter, Roberta, from his first marriage, his stepsons, Matthew and Kester, and four grandchildren.
Bob Symes,
6th May 1924 to 19th January 2015.