The first “Hornby clockwork train” was released by Meccano Ltd. back in 1920 and therefore the current Hornby are marking the Centenary in style. The full history of Hornby can be found elsewhere but I am sure we are all familiar with the Hornby brands and ranges including:

In this post I will provide outline details of the limited edition centenary releases and their new tooling releases; although there is new tooling for the Southern  Railway modeller this year, new livery versions of existing tooling relevant to Southern / Southern Region are included.

I am also able to bring some additional information regarding Work In Progress the remaining outstanding Southern related items. The full 2020 range is available on the Hornby website here. (For a video round up, see these three videos on Hornby’s 2020 range)

Hornby’s Centenary Year will include a variety product launches including a special range of limited edition products to celebrate each decade and will feature packaging to represent the relevant decade and include a limited edition certificate. They will be released evenly during the year.

Other celebratory limited edition collectable mechanise will be available including: a mug, pen and gold plated anniversary badge and a new book by Pat Hammond ‘The Hornby Book of Trains The First one Hundred Years’.

Also keep and eye out for the Hornby Centenary video campaign, a limited number of tickets available for a British Belmond Pullman Experience train on Saturday 19th September behind 35028 Clan Line. One box in each of the Centenary range products above will feature a ‘Golden Ticket’ to win one of a number of prizes including a trip on the Belmond Pullman or vouchers for the Hornby website.

Whilst there is no new tooling this year for specifically Southern / Southern Region modellers, except BR Mk1 RB Coaches, Hornby are still investing in an ambitious plan for the year that includes:

New liveries for Southern / Southern Region models are listed below:

The railroad range is slightly enhanced with a “Plus” version of the range with additional livery details and touches, including in some instances etched nameplates, when compared to the existing Railroad range. The range includes 3 off Class 47 Co-Cos ,  a Class 20 Bo-Bo, a Class 37 Co-Co, a BR 2-10-0 9F class No. 92218 and finally R3910 Class 73 Bo-Bo No. 73964 ‘Jeanette’ in GB Railfreight livery – available September.

Whilst we have been able to take delivery of many of the Southern / Southern Region modes from last years range such as the all new tolling ex LBSC A1 and A1X Terrier locomotives, the excellent Bulleid 59ft coaches and the just arrived ex LSWR Diagram 1543 24t Goods Brake Vans, some items have been delayed. It is well known that the Hornby supply chain includes a number of different factories in China, one of which was unexpectedly at very short notice closed, due to a compulsory purchase of the land by the Chinese government!

Included within the 2019 range was also R3649 – BR 4-6-2 ‘Ellerman Lines’ ‘35029’ Merchant Navy (Original Air Smoothed) – BR Brunswick Green, early crest representing the condition she ran in between July 1952 and June 1959 when she was rebuilt. This model required new tooling to be completed for the 5100 gallon, series two tender (no 3129) that she was paired with in 1952. The Engineering prototype of  this new tooling can also be seen left. This is a very positive step as it will open up the possibilities for Series Two Merchant Navy models to be produced int he future so watch this space.

Hornby have also announced an brand new phone or tablet based analogue control app that can control up to 8 separate circuits of track. 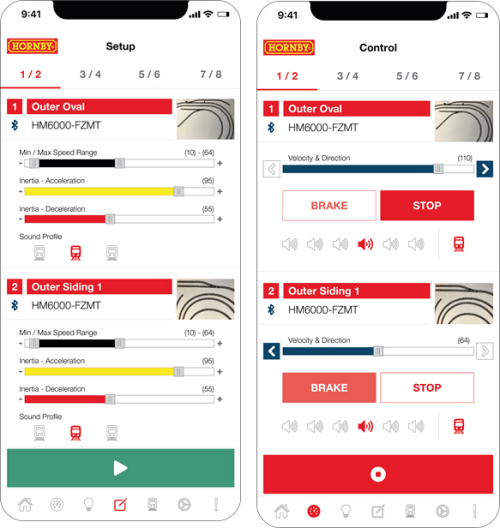 The system works via a bluetooth between the phone / tablet app to layout mounted HM6000 base units that can each control up to two separate circuits and up to 4 HM6000 units can be connected together (note track power as per analogue as no chips are required for locomotives).

It also includes locomotive sounds (from the phone / tablet speaker not the locomotive).
This system is a step between the traditional rotary knob type controller and DCC style control via apps like WiThrottle.

A complete new market sector for Hornby and launched via the Bassett-Lowke brand as they meld together the world of Steampunk; a World where steam has evolved into the primary power source, where dinosaurs are domesticated, where the elegance of tea drinking is the ultimate pleasure and where society is still enmeshed in the Victorian era; as an introduction to model railways.

Initially a range of models from locomotives, rolling stock and buildings will be available, that have been created from minimal modifications to existing tooling and the addition of extra resin parts.

Any new market sector and development that has the potential to bring new interest into the hobby, also think of some of the layouts and animations that appeared in the Channel 5 Great British Model Railway Challenge, is to be applauded.

I would also like to take this opportunity to thank the team at Hornby for the hospitality extended to me last month and the advanced information provided to enable me to bring the above summary of their celebratory plans for this year ahead to you.