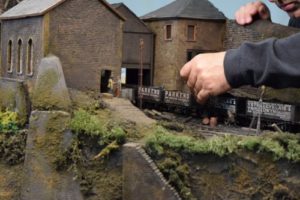 Even with the best intentions, things don’t always work out how we’d planned.

This is never truer than with model railways.

Inspired by pictures of exhibition model railways we dive into building our own. And after months of money, effort and time it’s finished.

Ring the bells! Hoist the flags. Your miniature version of train-topia is complete.

It just doesn’t look right. Actually, if the truth is known, more often than not it looks anything but right.

Luckily, your time, effort and energy haven’t been wasted.

I’ve been there lots of times and over the years have found five simple remedies that can transform an otherwise unsatisfactory into a layout to be proud of.

#1 Boost it with a Backscene

Backscenes are scenic pictures that add depth and context to a model train layout. Without them, a layout is just a collection of track in the corner of a room and I’m always surprised by how many modellers skip the back scene.

This is odd as they’re such a simple and easy accessory to add.

In their simplest form, they’re just a painting of sky pinned behind the layout but they can also photorealistic landscapes and townscapes that revolutionise the look of a layout.

See my post, Backscene Masterclass, for tips on making and erecting back scenes.

The track wiring and point motors are vital to the operation of our model railways but they’re also a huge distraction. I’ve covered soldering here.

The same can be said for track side point motors.

The easiest option is to hide these in buildings next to the track.

The better option, although far more difficult, is to switch to using under board point motors — where the motor switching the point is mounted under the baseboard.

Doing both will remove all the visible wires from your railway and make it look far more believable and credible.

#3 Illuminate it with building lighting

Simple to do but adding lights brings a model railway to life.

Adding lights to the inside of buildings brings reality to your railway. Many beginners often shy away from this thinking it’s too difficult but I’d urge you to have a go. It really makes a massive difference!

It’s also easy to do as I explained in Adding Lights To Your Model Railway – The Low Cost Option.

If you’re not yet confident with electrics there’s an easier option which I covered in Cheap, Easy, Lights For Your Layout.

#4 It’s not just the trains that move

Trains aren’t the only thing that can move on a model railway. Having road vehicles winding their way around the tarmac of a layout will add a whole new level of interest.

People, after all, expect the trains on a railway to move but when other vehicles also burst into life it creates a whole new level of interest.

In the past, this has been a real challenge and is one of the biggest surprises for those returning to the hobby after a break. Previously it simply wasn’t possible to get scale road vehicles moving (getting the trains to work reliably was enough of a challenge) but it’s now pretty straight forward and possible with off-the-shelf kits.

Even better, these kits can be adapted to other forms of transports such as boats on rivers.

The two most common systems for non-rail moving vehicles are the Faller Car System and Tomitec bus system. The former is easier given you can incorporate the magnetic route wire into your own roads while the Tomitek system requires its own roads to be used but is cheaper.

The video below shows the Faller system.
&nsbp;

The classic words uttered by companions of Doctor Who when seeing the Tardis for the first time also hold true for model railways with a little optical trickery.

On hearing the words model railway most people think small but with through the careful use of forced perspective and back scenes, your layout can appear bigger than it actually is.

Having roads and rivers disappear into the distance works wonders and dramatically changes the look of an otherwise small railway.

It’s easy to do once you’ve picked where it will work best.

Just watch out for Daleks!


>A final, personal, note: I spend a huge amount of time testing, photographing, writing and researching techniques for these articles and pay for all the running costs of MRE out of my own pocket. If you found this article useful you can support me by making a donation on my fund-raising page. Thanks and happy modelling, Andy.
Updated:Monday, September 7, 2020