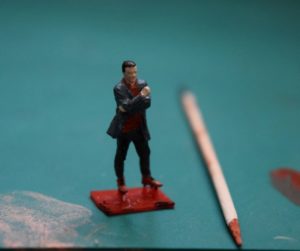 Do you have a mini-you on the layout?

Every layout should have a miniature representation of its builder.

The little you may be a train driver or fireman on the footplate, a passenger on a platform or perhaps a farmer in a field but you should have one. It’s an EU law*

It’s a personal touch and little detail that adds to the uniqueness and character of your model world.

The challenge has been finding figures that look like yourself.

Often some imagination was required and most of us end up with a miniature that, if we’re lucky, is roughly the same shape!

Until now that is…

Modelu is a British company, run by Alan Buttler, that offers an innovative 3D scan and print service to create a miniature version of yourself.

I caught up with Alan at Warley 2017 and after chatting for a while let him loose with his scanner. 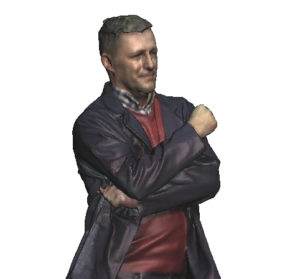 The electronic version of me, ready for printing.

This was simply a case of standing in the position I wanted the model to appear in as Alan walked around with his handheld scanner.

After a little manipulation of the data, a file was produced.

This went back to the Modelu office where it was printed on a 3D printer to the scale required.

The little figure was then posted back ready for painting and positioning on my layout.

The painting is fiddly, given the size, but no more so than any other object on the layout. A brush, size 1 in this case, is fine although I also used a cocktail stick to dab paint on in places.

I’m really happy with the finished result (first picture above) and it’s now got pride of place next to my engine shed. 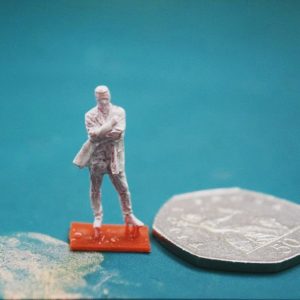 My figure washed and primed ahead of painting.

> Modelu is on 07887 803 737 and can be regularly seen at model railway shows where you and family members can be scanned. Prices, at the time of writing, are £25 for the scan and between £1 and £25 per printed figure depending on the scale. Full details, including the next shows Modelu is attending, are available on the website.

Disclosure: Modelu scanned me and sent the figure used here for free in return for review but no assurances were sought or given as to the content or conclusion of this review.


> A final, personal, note: I spend a huge amount of time testing, photographing, writing and researching techniques for these articles and pay for all the running costs of MRE out of my own pocket. If you found this article useful you can support me by making a donation on my fund-raising page. Thanks and happy modelling, Andy.
Updated:Thursday, December 3, 2020