The winners have been announced.

The votes have been counted in the model railway industry ‘Oscars’ and I’m delighted to report that in its first year of being nominated, Model Railway Engineer.com is amongst the winners. 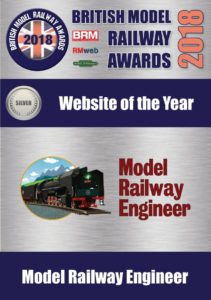 I’m overjoyed to pick up an award in the Website of the Year class.

Congratulations to UK Model Shops and the N Gauge Forum who picked up gongs too.  It’s amazing to be alongside such well-known names in the model railway community.

The full list of winners includes Hornby as Manufacturer of the Year, DCC Concepts Point Rodding picked up Innovation of the Year, Hattons won the Customer Service Award while Modeller of the Year was a sadly posthumous award for the legendary Allan Downes. Congrats to Mike Buick who was recently interviewed for coming third.

Coming second in its first-ever entry in the hobby’s biggest awards is a fantastic achievement, brings another shiny meedle to MRE’s award cabinet and I thank everyone who supported, nominated, voted for the website. I’m truly honoured.